Long-duration electricity storage (LDES) – storage systems that can discharge for 10 hours or more at their rated power–  have recently gained a lot of attention and continue to be a technology space of interest in energy innovation discussions. The increased interest stems from a growing appreciation and acknowledgement of the need for “firm” low-carbon energy resources to complement variable renewable generators like wind and solar[1], and ARPA-E is actively working to increase storage capacity to help fill this need. LDES is one of the innovations that will help the U.S. achieve a net-zero carbon electricity system—a target being adopted by a growing number of states and utilities[2]—by dispatching low-carbon power when needed.  While shorter duration energy storage technologies like lithium ion batteries can handle much of the intra-day variation, like shifting midday solar power generation into the evening hours, longer duration options are required for periods of low wind or sun that span many days. Furthermore, the increasing frequency of extreme weather events such as fires and strong storms are driving the need for the local, clean, affordable, and resilient backup power LDES systems can provide.

ARPA-E’s Duration Addition to electricitY Storage (DAYS) program is funding new LDES technologies to meet this need. The program works to develop solutions that can provide 10 to 100 hours of storage at a levelized cost of storage (LCOS) of 5 cents/kWh or less. LCOS is a helpful way to compare a wide range of different technologies, as it considers a system’s expected cycling frequencies, capital costs, operating costs, and both charge and discharge efficiencies. DAYS’ LCOS target implies that for a successful technology, the difference in cost between electricity that is stored and later released from a LDES system, versus electricity that is not stored, should not be more than 5 cents/kWh.

DAYS is focusing on technologies that can be sited across a wide range of geographies. For instance, while pumped stored hydropower is extremely valuable and accounts for over 90% of U.S. energy storage capacity[3], it requires specific geological or topographical formations. ARPA-E is working on a variety of options to fit any set of requirements.

Despite growing recognition of the key role that LDES plays in decarbonizing the grid, market challenges remain. The economics driving the current wave of lithium ion battery deployments in many cases rely on two key value streams: grid ancillary services and energy arbitrage. Ancillary services are required to maintain the stability of the grid and the constant real time matching of electricity supply and demand. As these services generally require short, fast-burst responses, much of the value from ancillary services can be captured using very short duration systems. In the PJM market, for instance, 30-minute lithium ion batteries have been deployed widely for just this purpose[4].

Energy arbitrage is the time shifting of energy to make money from buying low and selling high. Due to the nature of such an arbitrage the first hour of storage, when the system charges at the lowest-priced hour of the day and discharges at the highest-price hour, will be the most valuable, followed by the second hour of duration, and so on. Because of this diminishing return on duration, systems with about 4 hours of duration or less are generally used for this arbitrage application.

LDES technologies will likely require different value streams that are focused on the resiliency or capacity that they provide. The value of LDES technologies, for example, might be replacing aging physical assets such as transmission lines, diesel generators, or power plants, rather than simply displacing them for a few hours a day. Shorter duration technologies paired with renewable resources are already able to compete against peaking power plants which only run a few hours at a time; longer durations will be needed to displace more capital-intensive baseload and load-following plants (which run at some level of output for most hours). If this can be achieved at a price point where the capital needed to build and operate an LDES is less than the savings from displacing infrastructure like a load-following power plant, then the opportunities for LDES will begin to flourish.

The below chart shows the market dynamics driving short vs. long duration energy storage. While current lithium-ion batteries can thrive at shorter durations, where the value that they generate exceeds their cost, cost increases more rapidly with duration than LDES technologies. Conversely, LDES, due to its more expensive power components, may struggle to be profitable at shorter durations, but its more gradual cost curve enables deployment in scenarios where there are jumps in value (illustrated by the step change in the value line) caused by the deferment or displacement assets needed for reliability. 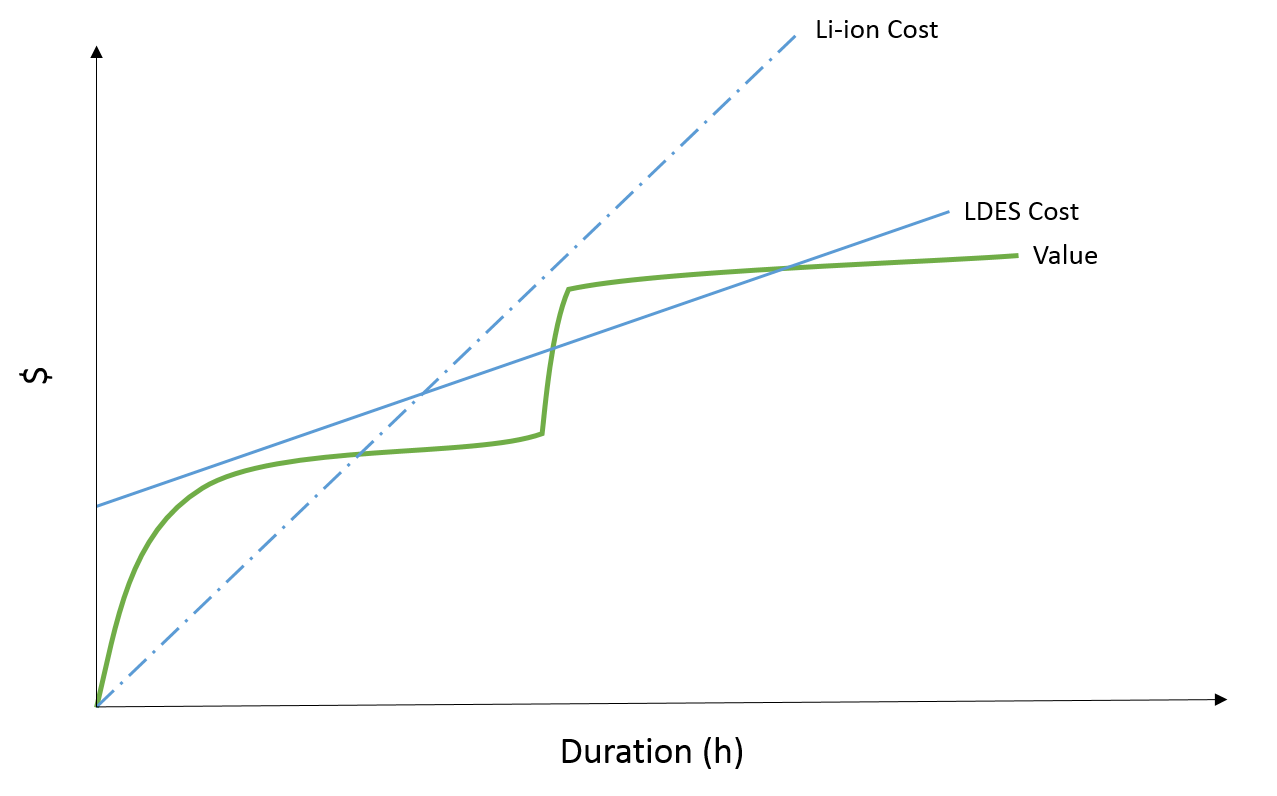 DAYS awardees are advancing a range of technologies that take on the challenges and capture the opportunities presented by LDES, and many teams share some key attributes common to LDES. For instance, they generally utilize decoupled power and energy components (unlike lithium-ion batteries), with inexpensive energy storage media made from abundant materials like water, sand, sulfur, and cement. The low capital cost of these energy storage media is vital to achieving the DAYS program cost target. As a result of less-frequent cycling, LDES systems can also make different tradeoffs to lower capital costs than shorter duration systems, such as managing lower round-trip efficiencies and lower cycle life.

LDES technologies are sure to play an important role in the evolution of the power grid, and at ARPA-E we’re excited about the wide-ranging contributions that the DAYS teams are making to realize a cleaner, more resilient energy future. Check out our DAYS program page for more on the program and our performers and stay tuned for future updates of how we’re working on LDES tech at ARPA-E!