Better Together: Fuel Cell & Engine Hybrid Systems
Behind the Scenes with Dr. David Tew, Program Director at ARPA-E
Dr. David Tew discusses his background, why he came to ARPA-E, and what it's like to work on a new technical area. 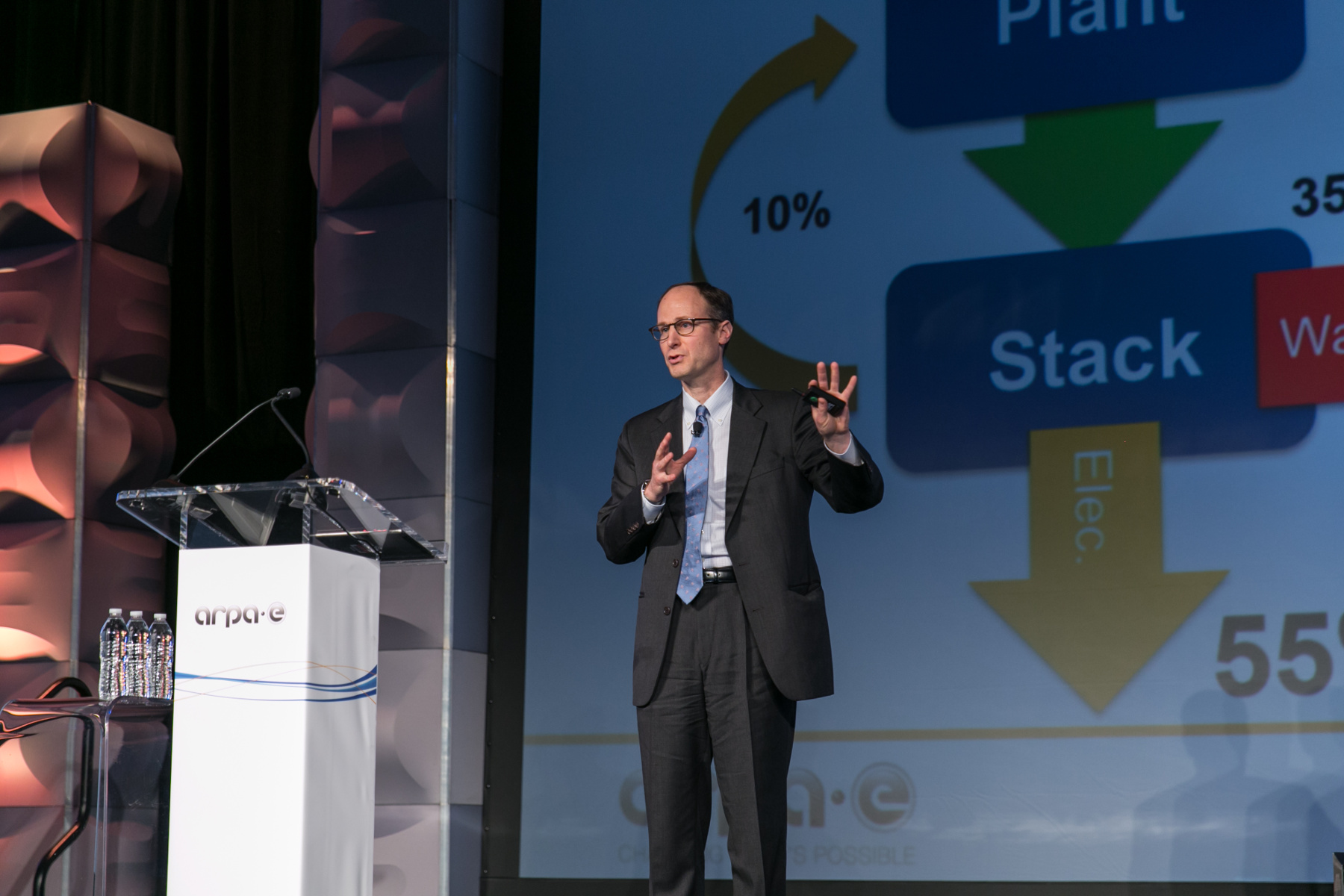 1. Tell us a little about your background. How does your previous experience provide insight into your work at ARPA-E?

I joined ARPA-E after a nearly 20-year career at United Technologies Corporation (UTC)—an aerospace and building products conglomerate. At UTC, I worked at the Research Center, Pratt & Whitney, and UTC Power. Before joining, I was a post-doctoral associate in the Gas Turbine Laboratory in the Aeronautics and Astronautics Department at MIT, where I also earned an S.M. and Ph.D. During both my academic and professional careers, much of my research has been focused on the development of aerospace propulsion system technology.

I also worked to apply these technologies to other areas that might seem like an unlikely fit at first, such as commercial buildings, while also moving building products technology into aerospace applications. This work continues at ARPA-E, where we are exploring ultra-high efficiency (greater than 70%) hybrid fuel cell (typically a building product) and engine (perhaps an aircraft engine) systems for generating electricity for commercial buildings. Moreover, this technology also has the potential to disrupt the status quo in many more stationary power and transportation applications.

2. Why did you decide to come to ARPA-E, and can you describe your experience so far serving as a Program Director?

I joined ARPA-E for the opportunity to pursue the development of technologies too high-risk for commercial entities (like my former employer), such as hybrid fuel cell and engine systems. The technologies that ARPA-E is pursuing have the potential to dramatically reduce both the cost and environmental burden of meeting our energy needs. ARPA-E plays a critical role in de-risking technologies that U.S. companies may otherwise not pursue because they are too early stage. In doing so, we’re enabling American companies to pick up the baton and move forward with products that benefit our economy, security and environment.

Thus far, I have greatly appreciated the opportunity to serve as an ARPA-E Program Director. It is exciting to be a part of an organization dedicated to maintaining America’s competitive edge in energy innovation. We play a vital role in furthering technologies that could have a ripple effect throughout the economy—spurring new industries, developing exports, and more.

3. ARPA-E recently released a Teaming Partner List on Hybrid Systems for Ultra-High Efficiency Conversion of Natural Gas to Electricity. Why is ARPA-E interested in this technology area?

At ARPA-E, we are charged with improving U.S. economic competitiveness, security, and environmental well-being by advancing early-stage energy technologies. One area in particular that we focus on is improving how we generate and distribute electricity on the grid. This is an important topic for us to address, because the current system we use is actually quite inefficient. Because we focus on tackling some of the toughest challenges in the energy world, the case for ARPA-E’s involvement in this critical sector is clear. We are exploring this technology area to see if it’s possible to create the kinds of tools we need to save greater than 1 quadrillion BTU per year in lost energy—or about $3 billion per year in fuel savings.

4. Why do you think this is the right time to pursue these kinds of hybrid, distributed systems?

The electrification of the United States via the centralized generation model was one of the greatest technical achievements of the 20th century. By today’s standards, though, it is woefully inefficient. In 2015, for example, two-thirds of our nation’s electricity was generated from fossil fuels at a net delivered efficiency of just 34%. Hybrid, distributed systems could potentially offer unprecedented efficiency and lower emissions than today’s fossil-fuel generated electricity. Moreover, these systems could significantly drive down the cost of electricity for industrial and commercial customers. In 2015, for example, commercial customers paid an additional $0.07/kWh on top of the wholesale price of electricity to have it delivered to them via the grid. Just by eliminating the need to transmit electricity over the grid, these customers could realize substantial savings and pass them onto consumers. Since we’re just a few key technical steps away from being able to generate ultra-efficient, cost-effective power on site, it’s important for ARPA-E to pursue this white space now.

5. What’s so interesting about using natural gas in this application?

Roughly two-thirds of our electricity comes from fossil fuel sources, and these energy sources are valued for their low cost and ability to ramp up or down quickly. We can assume that fossil fuels will remain an important part of the power mix for the foreseeable future, so focusing on efficiency with these sources makes a lot of sense. My hope is that one day we will develop devices that could eventually show thermal efficiencies higher than 70 percent—about twice as much as today’s central power plants.

We produce natural gas domestically, and its affordability has helped make it an increasingly popular fuel for electricity generation. We also have an established natural gas infrastructure in place that makes moving the fuel around an easy process. It is important that the fuel be easily transported if we hope to develop power solutions that can be used on site at commercial or industrial facilities.

6. What are the long-term possibilities for something like these hybrid systems?

Hybrid, distributed systems have the potential to dramatically improve power system efficiency while cutting costs and lowering emissions for major electricity consumers. For critical customers, like hospitals and military installations, these systems would make them more resilient in cases of extreme weather or other events that cause power outages.

Advancements in hybrid, distributed systems could also lead to improvements in our transportation system, like more efficient engines for cars, trucks, airplanes, and ships. Like many ARPA-E programs, the technical breakthroughs I am exploring could generate important benefits in other industries across the economy.

For more information on Dr. David Tew, visit his profile on the ARPA-E website. To learn more about ARPA E’s exploration of this technical area, check out the teaming partner list.

Stay in touch with ARPA-E by subscribing to our newsletter.

Updated July 26, 2017: ARPA-E today announced up to $20 million in funding for the Innovative Natural-gas Technologies for Efficiency Gain in Reliable and Affordable Thermochemical Electricity-generation (INTEGRATE) program. The deadline to submit a Concept Paper for INTEGRATE is 5 p.m. ET on September 11, 2017. Additional information, including the full FOA and how to find project teaming partners, is available on ARPA-E’s online application portal, ARPA-E eXCHANGE.