Achieving widespread adoption of hybrid electric and electric vehicles (xEVs) requires minimizing the cost, volume, and weight of the battery while still meeting the range and safety expectations for on-road vehicles. The Department of Energy’s U.S. DRIVE initiative has set the goal of a 15 year lifetime at a cost of $125 kWh-1 with an energy density of at least 235 Wh/kg. These goals are intended to lower barriers to market adoption of electrified transportation for the purpose of ensuring U.S. energy security and reducing greenhouse gas emissions. The cost per kWh has dropped significantly in recent years, and cell-level energy density is now moving above 250 Wh/kg. However, we do not reap the full benefit of these advances: because today’s battery management systems (BMS) apply conservative operating limits, the full amount of a battery’s energy cannot be accessed. As a result, the battery packs in today’s xEVs are typically 1.25-2 times larger than would be needed if the full capability of the battery chemistry could be accessed. Developing approaches to cost-effectively maximize cell-level performance remains a significant technical challenge for energy storage systems.

Advances in power electronics hardware and software provide opportunities for significant improvements to the BMS.  A key issue in battery management is that the battery packs consist of a string of individual battery cells connected, and managed, in series.  No two cells within the pack are physically identical due to manufacturing and aging differences, and the circuit configurations used today limit the capacity of a string of cells to the weakest cell in that string.  Recent progress in power electronics and adaptive control algorithms present opportunities for battery pack developers to rethink serial cell management.

Specifically, progress surrounding the construction and implementation of low-cost power converters and bypass circuitry has the potential to provide more versatile power architectures for battery pack designers. Such systems will enable the BMS to act on cell-level information, reroute power around weaker cells in a string of cells to optimally deploy the stored energy, and achieve performance gains throughout the life of the battery pack.

Under the ARPA-E Advanced Management and Protection of Energy Storage Devices (AMPED) program, Utah State University (USU) and its project partners set out to create a first-of-its kind advanced cell-level BMS that actively maximizes the performance of each individual cell within a battery pack. The key performance goals for the USU effort were to reduce cell imbalance across the pack by over half, and to extend pack lifetime by 20%.

The basis of the team’s concept is their pack electrical architecture, shown in Figure 1, which utilizes a bypass DC-DC converter circuit for each cell in the pack. This circuit topology creates a parallel pathway for current to flow and allows cell-level information to be utilized to optimally deploy each cell’s stored energy. Using this pack architecture, the team developed “active life balancing” so that each cell within the pack reaches the same targeted lifetime. A representive battery pack capacity fade is illustrated in Figure 2 where the spread in capacity between the weakest and strongest cells is indicated by the thin dashed lines. The active life balancing system biases stronger cells to carry more of the electrical load, thus enabling more of the pack’s capacity to be utilized over a greater number of cycles. The desired result is to delay pack end-of-life, the point where the pack cannot supply 75% of rated capacity, indicated by the red and blue triangles in Figure 2. 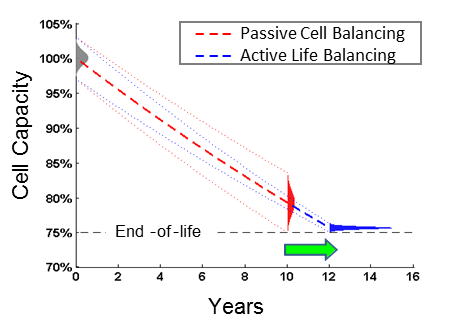 The major technical challenges that the team faced were in the design and integration of the DC-DC converter boards for a full-scale battery pack. The USU team recognized the opportunity for their novel BMS architecture to do double duty.  Their approach combines the BMS with bypass DC-DC converters connected to a 12 V bus, removing the need for a single large DC-DC converter external to the battery pack to power vehicle auxiliary loads. The team’s technoeconomic analysis shows that the new architecture can actually be lower in cost than the baseline approach, even before accounting for the enhanced performance and lifetime of the pack.

The project team has applied their network of bypass converters on a 7.5 kWh Ford Plug-in Hybrid Electric Vehicle (PHEV) demonstration pack. This pack was used to validate their circuit design and assess the value of their active life balancing methodology. During more than one year of accelerated dynamic cycling, the team reduced cell imbalance to half of that presented by the standard passive balancing system, and exceeded the life extension target. While the pack has not reached end of life, the degradation rate for the active life balancing system is projected to yield a 25% increased lifetime.

The team has also worked to evaluate a physics-based cell model to be implemented on their distributed DC-DC converters, to allow model predictive control (MPC). For demonstration, the team has implemented MPC operations on a sub-scale 4-cell battery module, and has shown in simulation that the MPC algorithms can enable an additional 10% increase in cell utilization and an additional 10% increase in lifetime over the baseline active life balancing demonstration without MPC.

During the ARPA-E project, the USU team worked with strategic partners who can utilize their modular bypass converter architecture in vehicle battery systems, and built an industrial advisory panel of automotive electrical components and sub-systems suppliers. Based on feedback from the industry, the team will next demonstrate a “cost-constrained” power architecture to manage power among small groupings of cells (instead of atop of every cell) while utilizing standard passive balancing circuits within each cell grouping. This system will employ simple rule-based limits to augment standard equivalent circuit control models. An internal development program funded by a major automotive manufacturer has recently launched a demonstration effort for this architecture.

Success on this project could put the bypass converter technology on a path for large-scale deployment on a U.S.-manufactured vehicle early in the next decade. One critical step for deployment of the technology will be reaching sufficient market interest to merit the development of dedicated integrated circuits in a commercial lab. Towards this end, the USU team will continue to build momentum for this technology through Utah State’s recently established Sustainable Electrified Transportation (SELECT) center. The SELECT center is set up to work with industry partners for continued development of the new BMS arcitecture, and to execute large scale demonstrations that will help develop interest and drive adoption by automakers.

The team also continues to explore other application areas.  For instance, the Office of Naval Research recently contracted the USU team to apply their advanced cell-level BMS to an energy storage demonstration on a tactical micro-grid, which would enable “plug and play” operation of different energy storage assets on the same electrical bus. Further development of the ARPA-E funded BMS technology for this application is expected to require a distinctly different productization path and set of licensing partners that will continue to leverage the successes of the original ARPA-E award.

The USU team’s technology provides a new mechanism, distinct from and complementary to better utilization of chemistry, to help support market adoption of electric vehicles. Taking the long-term U.S. DRIVE goal of $125 kWh-1, the value enabled by 20% improved lifetime and utilization would exceed $1,000 per vehicle for a 45 kWh EV pack.

The initial on-pack demonstration of this ARPA-E award has established that integrating power electronics into the battery pack can reduce cost, improve usable energy density through better capacity utilization, and improve lifetime for energy storage systems. The program has put this technology on the development path for xEV manufacturers, and the continued development activities for on-vehicle demonstration and manufacturing scale-up that are required before wide deployment.

As of August 2016, the USU team’s project has generated two invention disclosures to ARPA-E and from those, derived five U.S. Patent and Trademark Office (PTO) patent applications. The USU team has also published the scientific underpinnings of this technology extensively in the open literature. A list of publications is provided below: