Plant lipids offer a renewable alternative to fossil liquid fuels, providing an inexhaustible and sustainable source within the United States while reducing net greenhouse gas (GHG) emissions. However, there are concerns about land use and the agronomic inputs needed to harvest large quantities of biomass sustainably. Increasing the yield of bioenergy crops, and their energy density, addresses both economic and sustainability concerns, especially if the feedstock needs limited processing. Developing oil-rich crops that can yield economically viable drop-in fuels is of particular interest, but traditional breeding approaches, which in the major row crops produce 1-2% increases in yield annually, are insufficient to produce the gains needed.

Hybridization provides an opportunity to combine promising plant characteristics to create improved crops. Sugarcane is one of the most photosynthetically productive crops in the world and ethanol produced from cane sugar is cost competitive with gasoline. The yield of ethanol from sugarcane is almost twice that of corn grain on a per acre basis; however, sugarcane is a tropical plant and is not grown commercially in the United States outside the southern areas of Florida, Texas, and Louisiana. Miscanthus is a wild relative of sugarcane capable of hybridization with sugarcane, and is expected to confer some of its cold tolerance to the sugarcane-miscanthus (miscane) hybrids.

The Illinois team proposed to develop a bioenergy crop capable of producing 17 times the amount of oil produced by an acre of soybean and twice the fuel yield as corn ethanol in the United States by engineering sugarcane to (1) increase cold tolerance; (2) increase photosynthetic efficiency; and (3) accumulate energy dense triacyl-glycerol (TAG) molecules instead of sugar. While the optimal energy cane plant would contain all three traits, the Illinois team was only able to characterize each trait separately due to the long generation time in producing transgenic sugarcane. The baseline for the work is commercial sugarcane, which typically yields 10-15% sugar by weight and no TAGs. Miscanthus, which was to be hybridized with sugarcane, does not produce sugar or TAG. It is currently being developed as a cellulosic feedstock.

Prior to the start of this project, the Illinois team had collected a number of Miscanthus plants from cold climates such as Siberia. These Miscanthus were capable of surviving freezing temperatures, while in contrast sugarcane does not typically recover when exposed to temperatures below 10°C. The Illinois team crossed the two varieties of plants to generate miscane hybrids, and observed that some of the hybrids were able to retain 70% of their photosynthetic activity when grown at 14°C, over twice that of the sugarcane parent. These hybrids also overwintered in field trials in Arkansas under conditions that completely inhibited sugarcane. 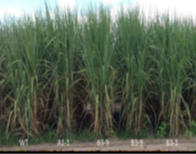 To further improve the efficiency of sugarcane, the Illinois team took advantage of its recently developed biophysical model of photosynthesis to identify transformed gene constructs predicted to improve photosynthetic activity and carbon fixation. By overexpressing specific genes involved in the C4 photosynthesis pathway, Illinois and its partners increased the carbon fixation activity of sugarcane. In field tests (Figure 1), certain lines of transgenic sugarcane exhibited >50% increased photosynthetic activity compared to wild type cane (Figure 2), and this translated to an increase in biomass of almost 50% in one line. Increase in biomass will in turn increase sugar yield per acre compared to wild type plants, because the sugar content stays constant. 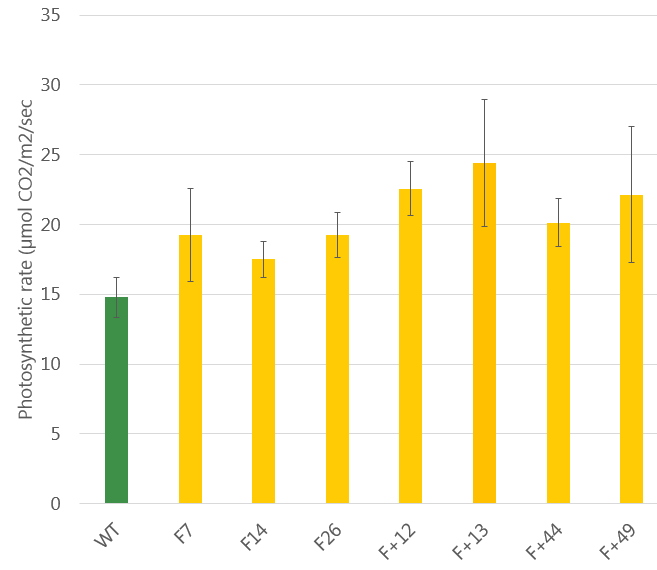 Illinois and its partners also introduced metabolic pathways responsible for TAG accumulation in the seeds of oilseed plants, and isolated sugarcane lines containing up to 8% TAG by dry weight in their leaves (Figure 3). This level is over 200-fold greater than observed in wild type cane. The transgenic plants did not show any negative impact on growth rate or overall plant health when grown in the greenhouse, and still accumulated similar levels of sugar as wild type plants. There was also a corresponding increase in total fatty acids in the plant, suggesting that there is still the potential to convert more fatty acids into TAG in the transgenic plants. 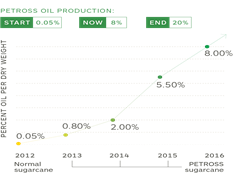 The cold tolerance and increased photosynthesis traits have the potential to increase the yield of one of the most productive crops on the planet and deploy it in the United States. However, the oil trait, which would convert the sugar into a more energy dense, easily-processed fuel product, is necessary to convert sugarcane into a bioenergy crop as there are existing markets for sugar that are currently more valuable than fuel. These three traits can be stacked together through traditional breeding, and are likely necessary to generate a single line that accumulates the targeted 20% TAG by dry weight and has a yield of 30 tons per hectacre in the United States—the levels necessary to meet the program goal.

Illinois modeled the economic impact of producing biofuel from cane that accumulates various levels of TAG compared to conventional sugarcane in Brazil, and current biofuel crops in the United States: corn (ethanol) and soy (biodiesel). Oil could be extracted from the Illinois team’s oilcane using existing crushing technologies for sugar extraction from cane. Based on current lipid processing technologies, the TAG from oilcane could be converted into biodiesel more cheaply than from a soy feedstock, and the remaining sugar in the cane could be converted into ethanol at a comparable cost to corn (Figure 4). At a level of just 2% TAG, oilcane would yield more biodiesel than soy on a per acre basis because of the high productivity of sugarcane. Based on metabolic modeling, Illinois expects to be able to reach 20% TAG in cane. Illinois has reached out to a number of industry partners in the fuel and chemicals sectors to incorporate the cane-derived TAG, which will be significantly cheaper than current sources such as soy, into existing biodiesel processes. Initial interest for oilcane has come from Brazil because of its existing large-scale sugarcane acreage and mature biorefining infrastructure, and a group there is working towards field testing the Illinois oilcane in Brazil. 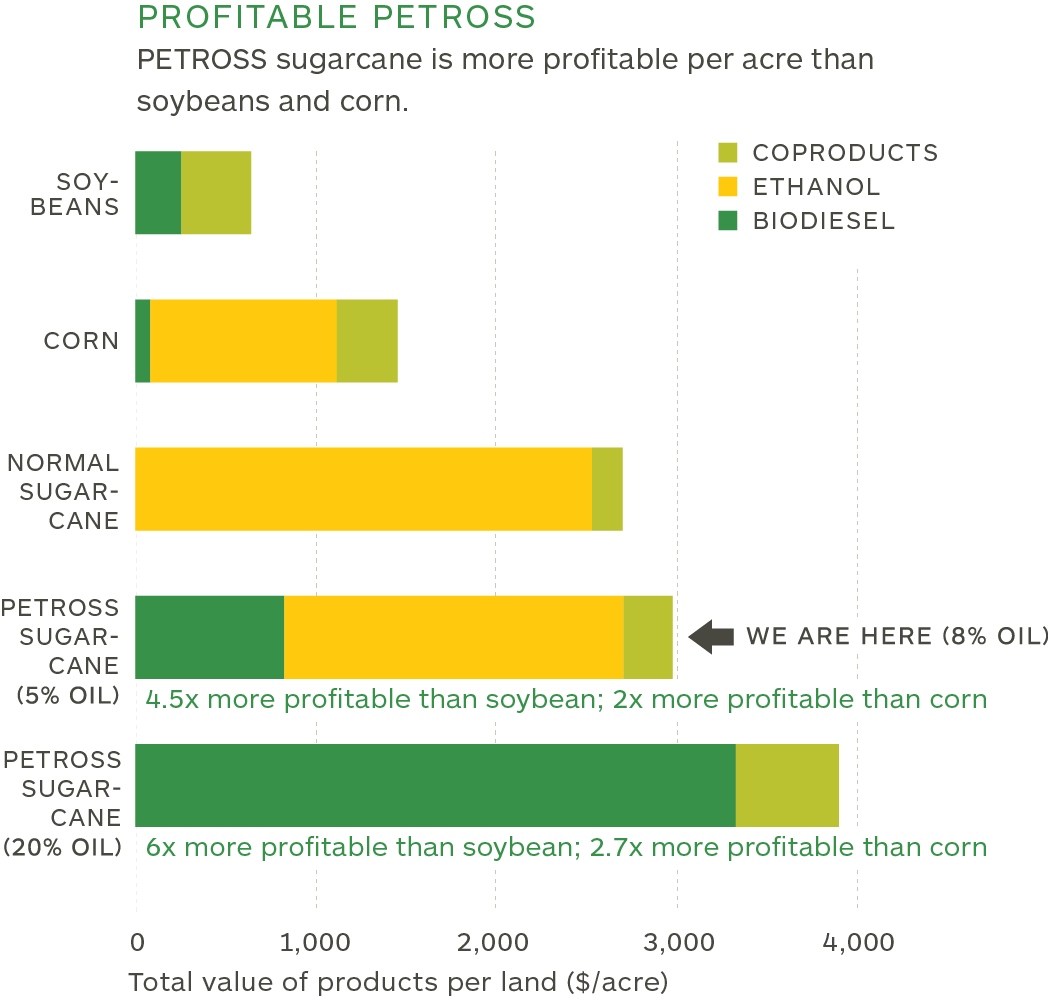 Illinois’ photosynthesis traits have the potential to generally increase productivity in both fuel and food crops, and Illinois has received a $25M grant from the Bill and Melinda Gates Foundation to utilize these traits in food crops. To move the most promising traits demonstrated in the PETRO project towards a first market, the Illinois team has partnered with Syngenta to validate the performance of Illinois’ transgenic sugarcane in Syngenta’s phenotyping facilities. If successful, Syngenta would license the traits and incorporate them into its commercial maize and sugarcane varieties for large-scale deployment.

The long-term outcomes of this project would be the combination of the three promising traits that were demonstrated. If that can be accomplished, it could yield a new biodiesel crop feedstock with a range as far north as Arkansas, that at the target level of 20% TAG, would deliver 17 times the oil yield per acre as soybean, reducing the land dedicated to growing bioenergy crops instead of food.

As of January 2017, the Illinois project generated three invention disclosures, one patent application, with one patent issued by the U.S. Patent and Trademark Office:

The Illinois team has also published the scientific underpinnings of the technology in the open literature. The publications are provided below: