The distribution grid that delivers electric power to customers is changing rapidly. Historically, it has been relatively simple, predictable, and had little need for real-time diagnostic capabilities. But the advent of distributed energy resources (DERs) and new types of loads such as electric vehicles makes the operation of power distribution systems a growing challenge. Fully realizing the emissions, reliability and cost benefits of DERs will require real-time monitoring of distribution system behavior, using synchrophasor measurements similar to those available in higher voltage transmission networks. Yet monitoring the distribution system is more difficult because the required measurements are far more precise and also more numerous than in the transmission system. Addressing these challenges requires technical advances enabling useful, ultra-precise measurements on the distribution grid and methods to assess and act on the resulting complex data sets.

The ability to combine high-quality electrical measurements with the time accuracy of GPS and wireless communications into a network of micro-phasor measurement units (µPMUs) or micro-synchrophasors provides new opportunties to monitor and control electricity distribution systems. Furthermore, advances in “big data” management tools and grid optimization algorithms make it possible to leverage the measurements from new sensor systems in important ways. The opportunities for applications include (1) supporting distribution system planning and operation functions related to utility owned infrastructural hardware; (2) supporting diagnostics of transmission system conditions from a larger number of measurement nodes; and (3) supporting the control of distributed energy resources – including generation, load, and storage – to realize their vast potential benefits for the grid.

The primary objectives for this project included both the development and testing of µPMU hardware and the exploration and validation of potential µPMU data applications that would be valuable for utilities. To achieve the resolutions and sentitivies required for distribution system measurement, the project developed a new, unified and commercially deployable sensor. The project team also had to build a completely new database infrastructure for high-resolution time synchronized data to enable processing and analysis of µPMU data streams. Existing tools for the analysis of time-series data were either too slow or had limited scalabilty for handling this type of data.

To address the hardware challenges, the team developed new firmware for the existing “PQube” power quality measurement device and integrated it with a GPS receiver in order to achieve extremely high precision and temporal resolution. The team verified the performance and accuracy of the µPMU, demonstrating phase angle measurements with a resolution better than 10 millidegrees, an improvement of two orders of magnitude over standard transmission synchrophasors, at substantially reduced cost. The team tested and deployed an integrated network of 44 µPMUs both within the lab and in various field settings with five partner utilities and gathered tens of terabytes of data from the devices.

For the database development project thrust, the team developed an innovative software technology named Berkeley Tree Database (BTrDB). BTrDB collects and stores many concurrent high-bandwidth, potentially unordered data streams 1400 times faster than the best previously available commercial solution. The database, which achieves a 2.9x compression ratio, has demonstrated a throughput of 53 million inserts per second (ips) and 119 million queries per second on a four-node cluster. The novel data structure allows for extremely fast multi-scale analysis of data, thereby enabling prediction and anomaly detection across the range of voltage, current, and time-scales that affect distribution performance. For example, locating a handful of voltage sags in 3.4B data points comprising a year of data requires less than 200ms.

Using µPMU data, the project team empirically characterized the steady-state and dynamic behavior of a set of electricity distribution circuits, developed a set of basic diagnostic applications, and laid the theoretical foundation for leveraging µPMU data in future control applications. The team’s study of early µPMU measurements revealed numerous conditions that were either unknown or suspected but not previously verifiable for distribution system operators. Through comparisons of empirical µPMU measurements with circuit models, the project team also identified key weaknesses of existing circuit models and tools as well as challenges for measurement accuracy under real-world field conditions. The team developed and validated several algorithms based on hypothetical µPMU input data including applications to calculate distribution state estimation, topology configuration, and fault location. The project team also developed early versions of working diagnostic tools with empirical µPMU data, including applications for model validation and for detection and classification of disturbance events (e.g. to identify causes of outages). These applications provided early value to the team’s utility partners. Conditions discovered or verified through µPMU measurements included high-impedance faults (e.g. arc flash or animal caused), reverse power flow, device malfunction, causes of voltage sags or load interruptions, and power and voltage oscillations at the transmission level. The team also developed and validated a methodology to estimate the real time generation behind the meter on a 1 minute basis to 6% root-mean-square error (RMSE)—significantly greater accuracy than state-of-the-art weather based methods for real time generation estimation behind the meter.

With the completion of this project, the hardware and data processing infrastructure technology is in place to enable the development of utility-grade real-time distribution network monitoring and control applications. The team has also developed several proof-of-concept µPMU applications in the lab. The next critical step is the further development and testing of these applications to prepare them for validation with utilities. Testing and validation of algorithms in actual utility operations will be crucial to the next stage of development.

Figure 2: A µPMU installed on a utility electric distribution pole. The device consists of a high resolution power quality monitor and a GPS antenna (mounted on top of the box in this installation). 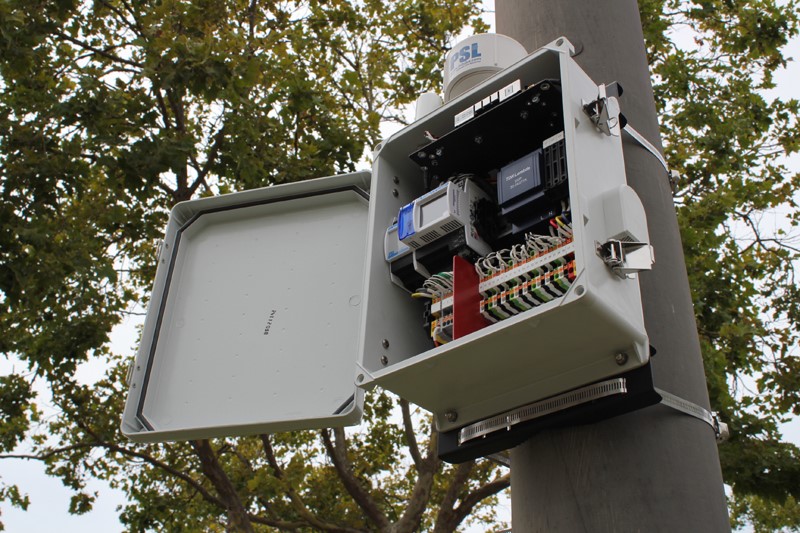 PSL has already begun to make commercial hardware sales of the µPMU[1] in the United States and internationally. Customers to date include Tesla, SolarEdge, the National Institute of Standards & Technology (NIST), Sandia National Lab, and researchers in Japan, Belgium, France and Poland. PSL plans to start selling µPMU Quick Start kits in 2016 that will include a small number of µPMU devices and the software needed to immediately start collecting and analyzing µPMU data.

The team has also identified a number of initial µPMU-based applications that they believe could be transitioned to utilities relatively quickly. Three commercialization partners, Smarter Grid Solutions, Doosan GridTech, and Ping Things, are facilitating development of utility-ready applications using µPMU data and/or the BTrDB software, which is being developed for release as open source. Initial applications will focus on giving utilities the tools to monitor and manage distribution feeders with high penetrations of photovoltaic generation and/or energy storage. The team is also working to improve the ability to perform real-time analysis and event detection on large-scale µPMU data streams.

In order to drive long-term impact through uniform standards, the team has spearheaded and chairs a distribution PMU working group at NASPI, the governing body for synchrophasors in the United States. Micro-PMUs are also central to multiple related follow-on projects funded by the U.S. Department of Energy and Department of Defense that focus on topics including microgrids and cyber-security.

When fully proven, applications using micro-synchrophasor measurements have the potential to create a transition from today’s opaque, data constrained operating environment to one that is more fully information-enabled. Improved distribution state awareness will facilitate the integration of high penetrations of distributed energy resources.

Furthermore, the principles and design of the BTrDB database are generally applicable to a large variety of timeseries types and represent a significant advance in the development of technology for the Internet of Things.

As of 2016, the project has directly resulted in five full-time equivalent manufacturing jobs in California, anticipated to rise to 25 in 2017 and with the potential to reach 100 over the next five years.

As of 2016, the project has generated one invention disclosure to ARPA-E, four U.S. Patent and Trademark Office (PTO) patent applications, and one patent:

“System and method for measuring a parameter of an alternating current power grid while minimizing the likelihood of lightning damage in a measuring system,” (2016), Patent No US9383397 B1, A. McEachern.

The open-source code for BTrDB is downloadable[2] and a subset of µPMU data are publicly viewable; a reference data set from LBNL is also to be released. The team has published the scientific underpinnings of this technology extensively in the open literature. A list of selected publications is provided below.