Thermoelectric power plants burning fossil fuels release over 2 billion tons of carbon dioxide (CO2) annually—37% of all U.S. emissions. Strategies for carbon capture and storage (CCS) figure prominently in most approaches to a deep decarbonization energy future. Post-combustion carbon capture, in which the CO2 is separated from other flue gases (primarily nitrogen), is the likely first approach because it is most readily retrofitted to existing plants. However, selective separation of CO2 from exhaust gas is technically challenging, and all capture processes require energy, which reduces the overall efficiency of power production.  Challenges in bringing new technologies to implementation are: (1) demonstration at the scale necessary for power plant application; (2) reduction of the parasitic loads (steam and power) required to support CO2 capture that significantly decrease power generating capacity; and (3) reduction of the costs of scaled-up processes to minimize impact on the levelized cost of electricity (LCOE).

The commercially demonstrated technology for capture uses chemical adsorption of CO2 with a monoethanolamine (MEA) solvent. The parasitic energy cost is estimated to be 22-30% of the power plant output, and the projected increase in LCOE is ~80% for a supercritical pulverized coal plant. The Department of Energy (DOE) goals for carbon capture call for removing 90% of the CO2 from power plant exhaust with no more than a 35% increase in the LCOE. Alternative approaches to selective, low-cost carbon capture include solid sorbents, which temporarily bind CO2 through physical or chemical interactions for subsequent release. Metal-organic frameworks (MOFs), crystalline compounds composed of metal ions linked by organic molecules in a highly porous, three-dimensional network (see Fig. 1),[1] are a promising class of sorbents. Because of the rich diversity in the various combinations of metal ions and organic linkers, MOFs offer opportunities to tune their properties to selectively bind CO2 with minimum energy cost and to withstand the harsh post-combustion environment. Developing and testing of these materials can be greatly accelerated using new high-throughput screening approaches. 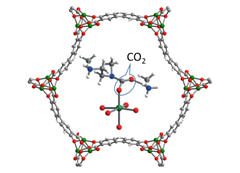 Under ARPA-E support, Lawrence Berkeley National Laboratory (LBNL), in conjunction with the University of California at Berkeley (UCB), Wildcat Discovery Technologies, and the Electric Power Research Institute (EPRI), set out to synthesize and characterize MOF sorbents for carbon capture applications. The approach was for Wildcat to construct and validate a custom designed, high-throughput system capable of measuring mixed gas isotherms for 28 samples in parallel and for the UCB team to use it to synthesize and characterize new MOFs which selectively adsorb large quantities of CO2 at low partial pressures. The system is designed to provide isotherm measurements, which allow for identification of promising sorbents. The high-throughput system was designed to mix a number of gases and control the humidity while maintaining a high level of precision, thus allowing the UCB team to rapidly screen materials for a variety of flue gas conditions.

Figure 2: a) Idealized CO2 adsorption isotherms at three temperatures; b) isotherms of a MOF with step-like adsorption. The double-headed arrows indicate the working capacity. 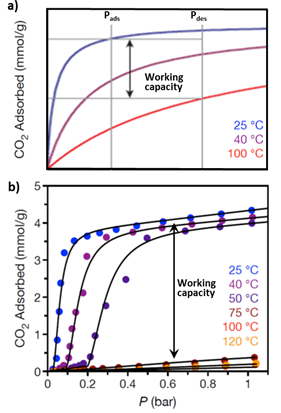 As the project progressed, UCB was joined by ADA-Environmental Solutions (ADA-ES) and the team worked to fine tune a particular class of MOFs and identify their capability as sorbents in power plant applications. Throughout both projects, the team was able to leverage the materials discovery research supported by the DOE Office of Science, Office of Basic Energy Sciences (BES) within the Center for Gas Separations (CGS), an Energy Frontier Research Center. The CGS was responsible for the initial discovery of a promising class of MOF sorbents that have 18-nm-wide channels (Fig. 1) with accessible metal surface sites that can be decorated with diamines and subsequently act as binding sites to insert CO2 molecules (Fig. 1 inset). The unique characteristic of these stable MOFs is reflected by the sharp step in the CO2 adsorption isotherms, which measure CO2 uptake as a function of pressure at fixed temperature (Fig. 2b). Compared to a typical sorbent (Fig. 2a), the amine-appended MOF-based sorbent (Fig. 2b) exhibits a much higher working capacity (the amount of CO2 removed) for a given temperature swing. This unusual isotherm results from reorganization of the appended amines into well-ordered chains of ammonium carbamate, resulting from chemical insertion of CO2 molecules (Fig. 1 inset).

The unique MOF isotherm represents an opportunity to reduce the parasitic energy load of CCS. Because the pressure at which the material demonstrates this step change depends upon the exact structure of the MOF, they are excellent candidates for rapid screening of numerous MOF compositions. The UCB team varied the MOF metal center (Mg, Mn, Fe, Co, and Zn) and the structure of the amine to identify the materials that perform best under realistic carbon capture conditions. The high-throughput system developed under the ARPA-E award allowed rapid collection of data at a large number of temperatures and partial pressures of CO2 for over 100 MOFs. The resulting data was combined with a carbon capture model for coal-fired plants, developed by EPRI, to further assess and screen MOFs based on adsorbent energy in an optimized power plant process. The models and materials were then further optimized with additional input from ADA-ES on realistic plant operating conditions.

Through this collaboration, UCB developed a MOF capable of selectively adsorbing CO2 from a typical coal plant exhaust stream and desorbing at only moderately higher temperature. The significance of this result is apparent in the EPRI models, which predict a decrease in parasitic energy penalty from 30% for traditional processes to 15% for an optimized MOF with a different appended amine. The UCB team also demonstrated scalability of the optimized adsorbent to over 300 g and prepared a pelletized form that is suitable for testing in fixed bed reactors. Testing in this environment will generate long-term cycle and thermal stability data in addition to more realistic sorption properties. ARPA-E support has enabled development of these novel systems from a BES materials discovery, through optimization for CO2 capture, and a path toward production and optimization on a commercial scale.

A new company, Mosaic Materials, was spun out of UCB in June of 2014 to develop an inexpensive means of producing the new CO2 capture materials on the ton scale in a pelletized form. The initial funding was provided through Cyclotron Road at LBNL, which provides promising innovators with the tools, capital, and partners needed to commercialize their technologies. Mosaic Materials has since received funding from the California Energy Commission to develop a low-cost material capable of upgrading biogas streams to pipeline quality by scrubbing CO2 and from the Office of Naval Research to scrub CO2 from the atmosphere of submarines. Mosaic Materials also recently closed a $1.5M Series A funding round with Evok Innovations, which will enable them to further scale up and gain traction in the marketplace. Finally, the Long Group at UCB has received funding from two oil and gas firms and a start-up company to investigate the fundamentals of new materials relevant to related CO2 separations, both by using the specific MOF system developed under this project and by applying the high-throughput discovery technology to fine tune other new materials for specific applications.

The novel class of adsorbents based on diamine-appended MOFs produced by UCB holds promise for cost-effective carbon capture in the future, as well as energy efficient applications in related industrial processes. In addition, the high-throughput analysis platform developed by Wildcat Discovery Technologies has the potential to rapidly screen numerous promising compounds under different conditions, mimicking conditions of flue gas from power plants and directly impacting the commercial viability of new adsorbents. Further improvements in related innovative adsorbent technologies for industrial carbon capture are possible. Implementation of such CCS technologies are enabled by the types of cost and performance improvements demonstrated for MOFs, but will also depend on policy decisions to move beyond demonstration and first-markets to widespread applications in thermoelectric power generation.

As of July, 2016, the team’s project has generated two invention disclosures to ARPA-E, two U.S. Patent and Trademark Office (PTO) patent applications, and two U.S. PTO issued patents. The team has also published the scientific underpinnings of this technology extensively in the open literature. A list of patents and publications is provided below: