U.S. thermoelectric power plants burning fossil fuels release over 2 billion tons of carbon dioxide (CO2) annually—37% of all U.S. emissions. Strategies for carbon capture and storage (CCS) figure prominently in most approaches to a deep decarbonization energy future. Post-combustion carbon capture, in which the CO2 is separated from other flue gases (primarily nitrogen), is the likely first approach because it is most readily retrofitted to existing plants. But CCS represents a significant cost to power plants, as current technologies would increase the cost of electricity by approximately 80%. This increase is due to high capital costs as well as the energy required: 2.6 gigajoules to capture 1 ton of CO2 with the standard commercial amine process.

The first step in CCS, CO2 capture, is a significant technical challenge and the most expensive part of the process. CO2 today is captured industrially by amine solvents. These solvents selectively bind CO2, but they are highly corrosive and must be heated to 120 degrees Celsius to release the captured CO2 and regenerate the solvent. The heat can be supplied by steam generated at a power plant that would otherwise be used to produce power. The corrosive nature of the amine solvent necessitates mixing it with a large amount of water that must be heated and cooled as part of the overall capture process. Capturing CO2 without requiring such large volumes of water could increase the efficiency and greatly reduce the cost of CCS. 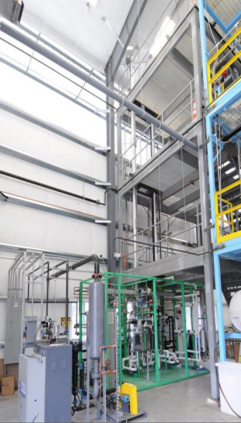 The RTI team’s goal was to develop a non-aqueous solvent (NAS) that does not need to be mixed with water, with the potential to reduce the energy cost of  CO2 capture by 20-30% compared with the current amine process. To do so, the team screened a large number of solvents to identify candidates with (a) low water solubility to avoid excess water uptake, (b) low vapor pressure to reduce solvent losses, (c) low heat capacity to minimize the energy required to regenerate the solvent, and (d) low corrosivity. This screening process identified 15 such candidates. After further testing, RTI selected 5 solvents that could potentially meet the target of being regenerated at temperatures below 120 °C, the current minimum temperature required for amine solvents.

Finally, RTI conducted longer-term testing of the most promising solvent composition, designated NAS-2. NAS-2 was tested for over 600 hours in simulated flue gas, which included contaminants such as sulfur dioxide. The team concluded that with some sulfur cleanup at power plants, the degradation rate of their solvent would be no more than 1% per 100 hours. RTI conducted a techno-economic analysis to estimate the expected performance of the NAS-2 solvent in a representative power plant, relative to the amines used today; they concluded that NAS-2 could be 20-30% better in terms of the parasitic energy penalty than current technology. In parallel, RTI built a larger-scale test facility at its campus in North Carolina, featuring a 35 foot high absorber column capable of capturing 185 kilograms of CO2 per day, more than 100 times the capacity of RTI’s smaller lab-scale system. Evaluations of the candidate solvents in this facility continued after ARPA-E funding ended, as described below.

Following completion of the ARPA-E project, RTI initiated a follow-on collaboration with Linde LLC and was awarded federal funding by the National Energy Technology Laboratory (NETL) in 2013 to refine the NAS solvents and test them in the larger facility equipment. The RTI team first tested a conventional amine solvent in the large facility to establish baseline data, then tested RTI’s most recent NAS formulation on simulated flue gas and in an optimized process configuration. Several hundred hours of bench scale testing have been completed. The results indicate that the NAS technology can reduce the energy required to less than 2 gigajoules per ton CO2, which is consistent with RTI’s early projections of a 20-30% reduction in energy required compared to state of the art. Solvent degradation was found to be within acceptable limits.

Following that project, RTI received additional federal funding from NETL to scale the RTI NAS process up to a 60 kW facility in collaboration with SINTEF, a Norwegian research company. RTI will test a baseline formulation at the SINTEF test site in Norway, before applying the RTI optimized NAS. The SINTIF facility is being outfitted with a multiburner that allows, for the first time, testing of NAS in coal-derived flue gas. The results will be used to create a more accurate projection of the CO2 capture cost for this promising new solvent.

The RTI project with ARPA-E and the continuing work at NETL have demonstrated significant potential to lower the cost of carbon capture in coal-fired power plants compared with the incumbent amine technology. RTI’s non-aqueous solvent could potentially reduce the energy required for carbon capture by 20-30%.

The technical feasibility and economic costs of carbon capture are an important input to policy decisions regarding greenhouse gas emissions. Since 2009, the technical understanding of the performance potential and associated costs for carbon capture have expanded significantly, but policymakers’ analyses of carbon capture costs are still shaped by the amine-based process. The work of DOE’s Office of Science, Office of Fossil Energy and ARPA-E is expanding the pipeline of innovative new approaches to capture CO2. The next few years of continuing development will establish where there are realistic options to lower the costs of industrial carbon capture sufficiently to make new processes economically attractive. As such work progresses, the outcome of investments in innovation in this field will begin to inform future policy decisions concerning carbon capture and its role in addressing climate change.

As of September 2016, the ARPA-E funding to the RTI/BASF team has resulted in four disclosures, four U.S. Patent and Trademark Office (PTO) patent applications, and one issued patent:

The RTI team has also published the scientific underpinnings of this technology in the open literature, listed below, and presented numerous conferences.