Solar is the fastest growing source of energy in the United States. Photovoltaic power conversion, while possible with fixed-tilt panels, obtains a significant efficiency increase and improves its capacity factor if the panels track the sun as it moves across the sky. However, current tracking systems are mechanically complex, increasing the costs of installation, repair and upkeep. This drives up the upfront and operating costs of the solar plant. Lack of tracker modularity decreases the amount of power obtainable from odd-shaped solar sites. Simple, reliable and modular tracking systems are required to continue driving down the cost of tracked solar generated electricity. Additionally, parabolic trough and tower-based concentrated solar power (CSP) plants would benefit from lower cost, lower-profile tracking heliostats to reduce the costs of the mirror field and improve overall reliability.

Outdoor mechanical tracking systems have a long history of use for astronomical and telecommunications applications, but these markets are not as price-sensitive as solar energy conversion applications. Until the past few years, the PV module has represented the largest cost component of a deployment and trackers were reserved for only the highest-efficiency (and highest-cost) concentrator cells. As PV module prices have declined while efficiencies have increased significantly over the past decade, commercial and utility-scale solar farms have been increasingly implementing 1-axis tracking systems to provide more annual energy production with over 80% of large-scale PV installations now utilizing trackers. Meanwhile, advances in both the materials and process of mass-manufacturing polymer molded products have allowed production of complex forms and structures at significantly lower costs, and with the ruggedness needed for applications in the challenging conditions of a PV system. As a result there are technical opportunities to transform the approaches being used for solar tracking. 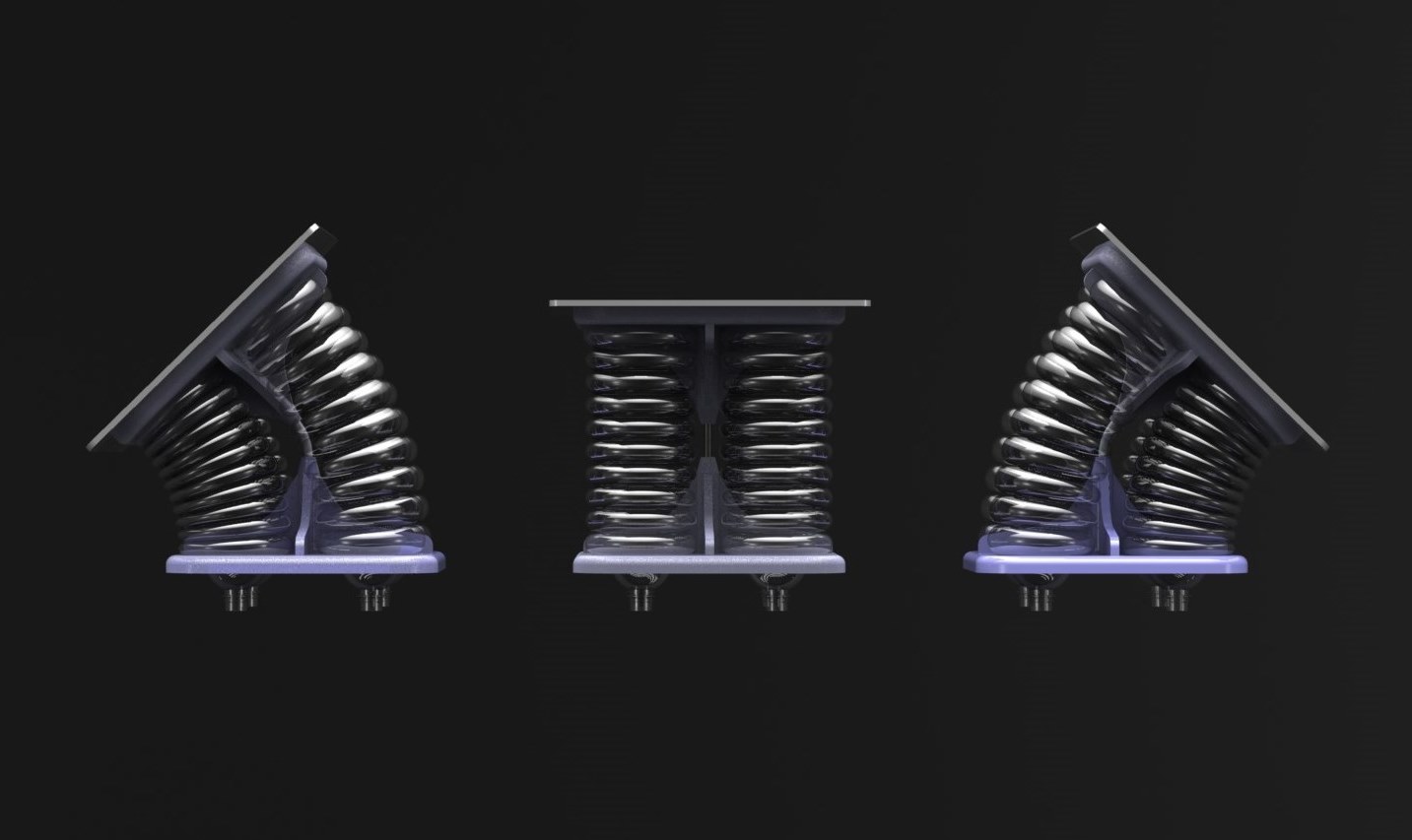 Otherlab began their project with the goal to disrupt the CSP cost structure by engineering a two-axis tracking system for a heliostat mirror field, and midway through their project, refocused to the development of single axis trackers for flat-panel PV. They had three technical goals: reduced windload by lowering the tracker height; achieve tracking accuracy needed for tower CSP; and substantially decrease complexity and therefore cost of installing in the field. Their approach to addressing these goals was to develop low cost fluid (air) based actuators. Their technology approach employs centralized fluidics to actuate the trackers while meeting or beating the tracking accuracy of distributed mechanical motor-based systems. The fluidics approach allows the system to be modular, reducing the costs of site excavation and leveling.

The team made extensive use of physics-based modeling tools to develop their initial designs for the actuation system. Two principal designs were initially explored followed by a downselect after several quarters of modeling, rapid prototyping, and technoeconomic analysis. A pneumatically-actuated antagonistic bellows design (pictured above) emerged as the most feasible and cost-effective option due to its lower overall mass, lower part count, easier fabrication/configuration, and improved pointing accuracy tolerances. Significantly, the bellows actuators are fabricated with a low cost, high-throughput manufacturing technique. In 2015 Dupont Performance Polymers joined as a strategic collaborator, advising on material selection and manufacturing, utilizing their expertise in long-lifetime, harsh environment applications like automotive and marine. While the team was able to meet their technical milestones for accurate two-axis tracking, the global CSP market entered a downturn. The team pivoted to providing single-axis trackers for the rapidly-growing solar photovoltaics tracker market, allowing further design simplifcations.

While the bellows-based drive system represents the core intellectual property developed for Sunfolding’s tracker technology, developing and demonstrating the supporting systems, their integration with the tracker, and ensuring long-term operation was essential to de-risk the platform as a whole. Tracking subsystems were set up and subjected to harsh environmental testing to ensure reliability over the anticipated 30-year lifetime of a PV plant. The tracking system passed the durability testing including simulated wind and snow loading and harsh-environment cycling. Following several design revisions to the bellows and component-level durability testing, the team implemented a ~6 kW outdoor tracking array in Sebastopol, CA, to acquire outdoor test data on a fully-assembled system. This system has been tracking reliably since August 2015. A second, larger (50kW) tracking array was recently deployed in Davis, CA in July 2016.

In 2014, the team received an Edison Innovation Award for their work on the pneumatic tracker.

In March 2016 Sunfolding was spun out of Otherlab, Inc. as a separate entity to focus on commercializing the tracking technology. Based on the demonstrated performance of the team and its technology in their initial two-year project the team was able to attract supplemental funding from the California Energy Commission (CEC, $1M) to allow the deployment of ~300 kW of tracked PV in 50 kW phases in Davis, CA (with the first phase completed in July 2016). This project is further solidifying the reliability and durability of the tracking system while incorporating successive design optimizations in each stage to improve the ease of installation and repair in the field.

The Sunfolding team projects that compared to traditional mechanical trackers, Sunfolding’s tracker significantly simplifies installalation and reduces costs by eliminating failure modes and reducing routine maintenance locations by 95%, cutting the number of unique components to be installed by two-thirds, improving construction tolerances, and reducing construction crew sizes by 30%. In parallel with its performance testing, Sunfolding has pursued an independent technology assessment of its product and production processes, which is a bankability requirement for most large-scale PV system customers. The first draft of the customer-facing bankability report was completed by DNV-GL in August 2016.

In 2016, Sunfolding was selected for a $2M DOE SunShot award to advance the production process to high-volume manufacturing and to drive currently specialized components towards more mass-manufactured solutions. Their 15 employees are located in the United States, as is their manufacturing supply chain. Sunfolding has also received outside financial support from private investors and is preparing to raise a Series A venture capital round in 2017.

Sunfolding is actively bidding on supplying new utility-scale single-axis tracked PV fields as the team continues to build out their ~300 kW pilot plant in Davis, CA. The team has a deployment target of >25 MW in 2017 with a pathway to $100M in revenue within 3 years.

Since Sunfolding pivoted the project towards single-axis trackers for the PV market, that market has seen significant growth with 6.7 GW estimated to be installed in 2016, with a >$10B worldwide market by 2020. Competition has increased with several new companies entering the market, but competitor product offerings are undifferentiated. Sunfolding offers long term impact in several categories.

LCOE reduction:  At scale, Sunfolding trackers will allow PV installations to achieve costs as low as $0.06/kWh by 2020 by lowering the upfront cost over currently available trackers and reducing end-to-end project costs. Preliminary estimates indicate that a solar PV system incorporating Sunfolding's tracker results in a nominal LCOE of 5.32¢/kWh in 2020, a 10% improvement over other trackers and 30% over fixed tilt systems.

Community Solar:  The Sunfolding tracker will work for sites of any size or shape at a cost that is currently achievable only at larger (100MW+) scale. This opens up new markets for tracking, including agricultural projects and community solar projects that serve residential customers who are otherwise unable to participate in the solar energy economy because they do not own or have access to their own roof.

Grid Benefits:  When the utility experiences high demand on the grid, trackers still produce considerable power relative to their noontime peak output. Solar production that is available later in the day will mean less air pollution from gas-fired generators during peak periods

As of August 2016, the Sunfolding project has generated 2 U.S. Patent and Trademark Office (PTO) patent applications.