Cabin heating and air conditioning play an important role in vehicle energy management. Degradation in efficiency, when running air conditioning, is reflected in the Environmental Protection Agency’s shift toward efficiency tests that include hot weather operation. This thermal management issue is particularly acute in electric vehicles (EV) because using electrical energy stored in the traction battery for cabin heating or air conditioning reduces the energy available for vehicle propulsion, thus decreasing EV range for a given electric charge.

A potential solution to address the energy requirements of vehicle climate control is a thermal battery, which stores thermal energy to provide heating or air conditioning to passengers in the vehicle. Historically, thermal batteries have not been able to provide capacity similar to electrically driven vapor compression systems at comparable energy use. It is also difficult to achieve the energy density, form factor, weight, and volume acceptable to automakers. Finally, cost is a significant consideration, as existing air conditioning systems are low cost following many decades of manufacturing experience.

Recent advances in material sciences have made a new generation of thermal batteries possible. There are advanced materials based on zeolites (aluminosilicates) and metal organic frameworks (MOFs) with exceptional potential to adsorb water vapor. Prior state of the art for adsorption-based systems was focused on zeolite materials capable of adsorbing vapor of less than 30% of adsorbent weight (wt%). Recent advances in zeolite materials have produced surface areas of more than 1,000 m2/g and pore sizes of ~3 nm, enabling 42 wt% water adsorption capacity. MOFs are a newer class of materials and represent the cutting edge of what may be achievable in adsorption materials. Constructed from metal ions/clusters and rigid organic molecular building blocks, MOFs have exceptionally high surface areas of 6,000 to 10,000 m2/g, high porosity, and exceptional vapor uptake capacities. These materials could enable a substantial increase in thermal storage capacity and reduction in size and weight. 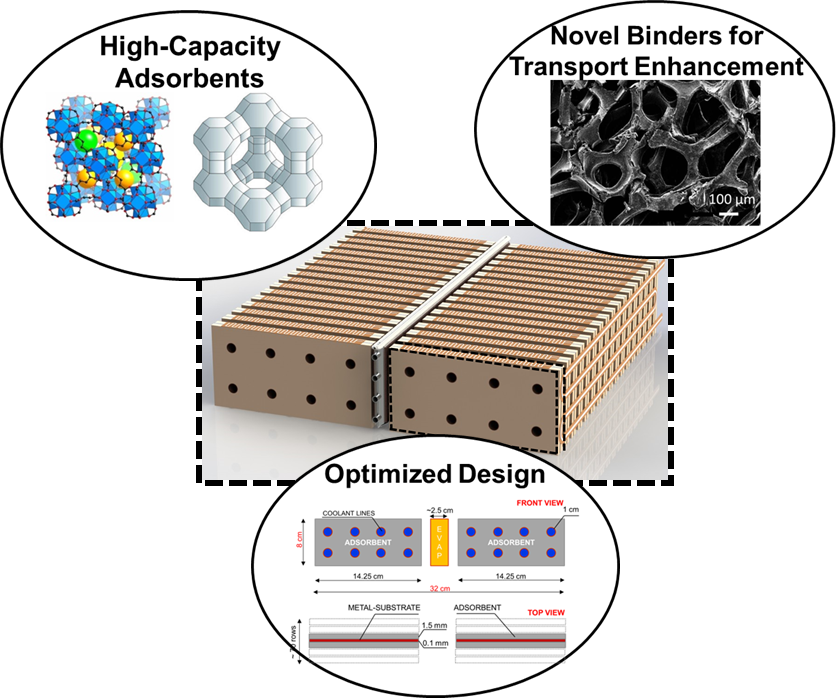 The MIT team’s goal was to develop an advanced thermo-adsorptive battery (ATB) that is both compact (30 liter) and lightweight (<35 kg) for climate control in an EV. The ATB integrates an adsorbent bed (i.e. a vessel containing water vapor adsorbing material) with a condenser, an evaporator, and a water reservoir. When the vehicle is not in use, the ATB can be “charged” by using grid electricity or waste heat to heat the adsorbent bed, which releases water vapor that turns into liquid on condenser surfaces and fills the reservoir. Vapor suction occurs by opening a valve connecting the adsorber to the evaporator, allowing the adsorber to pull the vapor created over the evaporator’s surfaces. When water vapor gets trapped in the adsorbent bed, heat is released and delivered to the vehicle heating, ventilation and air conditioning (HVAC) system for cabin heating. For air conditioning, the system works similarly, except that the bed heat is rejected to the environment, while the cabin heat is removed at the cold source created by the evaporator. The key to success lies in the identification of advanced adsorbent materials and the design and fabrication of the adsorbent bed, as well as the design of the evaporator-condenser unit.

The cornerstone of the project was to define and optimize an adsorbent material commercially viable for an automotive application. The team procured and analyzed existing zeolites and MOFs to set a baseline for water uptake and thermal characteristics to deliver to or remove heat from the cabin to ambient, and structural integrity (for resiliency against vibrations). The team then sought to improve upon the state of the art by synthesizing advanced zeolites and MOFs and characterizing their adsorption rates and capacities. The most promising adsorbents were selected for further cycling and stability testing. While several highly adsorptive new materials were identified, a commercial zeolite was selected for prototype development based on trade-off considerations of its performance, readiness of availability, and cost.

A second key challenge was to fabricate an adsorbent bed that would meet the stringent requirements for the ATB. The bed needed to hold enough adsorbent material to meet thermal capacity, size, and weight requirements, while allowing ease of vapor and glycol flows to preserve heat conduction efficiency. Analysis and experimentation resulted in a copper foam in which the adsorbent material would be poured, layered in between heat spreading fins to carry heat from the binder to the ambient. With continual guidance from Ford, the adsorbent bed was configured into an operational heat pump prototype for testing at the Ford facility.

Future pathways to impact will be facilitated by demonstrating the ATB prototype performance at Ford. Additionally, EV designers are experimenting with climate control strategies emphasizing more precise delivery of thermal services, such as modular HVAC systems that potentially would have different performance profiles compared to conventional, centrally located systems. The ATB could potentially enhance these alternative climate control designs.

This project could point the way towards expansion of the field of thermally driven climate systems to potentially make EV climate control operate somewhat similar to the conventional internal combustion engine (ICE) driven systems. These longer-term impacts rely upon further investment in fabrication of advanced adsorbents and integration into useful devices. Focusing on completion of an operational prototype, the team opted for commercially viable solutions that could be integrated more easily into the automotive supply chain. The MIT ATB design is flexible and ready to accommodate further advances in materials that will significantly enhance its performance.

As of December 2016, the MIT team has generated 12 invention disclosures to ARPA-E and 10 U.S. Patent and Trademark Office (PTO) patent applications. The MIT team has published the scientific underpinnings of this technology extensively in the open literature.  A list of publications is provided below: