Biofuels have lower net carbon dioxide (CO2) emissions than traditional fuels, because they are derived from plants, which use carbon dioxide from the air to build their biomass. However, photosynthesis, the molecular process by which plants “fix” carbon dioxide, is very inefficient from an energy conversion perspective, converting only 2-4% of incident solar radiation into stored chemical energy in the form of C-C and C-H bonds.[1] Due to this inherent constraint, traditional biofuels require large land areas to produce the appreciable quantities of biomass required as a feedstock for production. The limitations of traditional biofuel approaches warrant innovation in the area of non-photosynthetic autotrophic production of biomass with the goal of infrastructure compatible, energy-dense liquid fuels.

An alternative bioprocess for “fixing” carbon dioxide is through microorganisms termed chemoautotrophs that are capable of deriving energy not from the sun or from consuming sugar, but rather from inorganic energy sources such as hydrogen (H2) or carbon monoxide (CO). Some chemoautotrophs are even capable of directly accepting electrons from an electrode to power CO2 conversion to fuel and chemical molecules. However, historically, these organisms have not been evaluated or applied to producing liquid fuels for transportation. Recent advances in synthetic biology and metabolic engineering, along with the availability of genetic sequence information, have demonstrated significant potential to modify microbiological metabolic pathways to produce non-native chemicals and fuels in chemoautotrophic microbes.

Figure 1. Two-stage reactor system, with chemoautotrophic reduction of CO2 to create a product (acetate) that becomes the input to fermentation process for production of natural oils (TAGs). 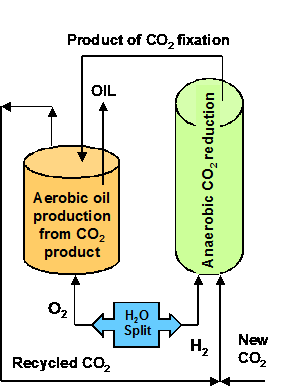 The Massachusetts Institute of Technology (MIT) led team’s goal was to produce an infrastructure compatible fuel starting from CO2 and H2, or carbon monoxide (CO), instead of sugars. The target fuel was energy-dense lipids called triacyglycerideds (TAGs). The overall strategy involved an integrated two-stage reactor system for 1) fixing CO2 with H2/CO with an “acetogenic” microorganism to produce acetate and 2) feeding acetate to an “oleaginous” yeast capable of achieving very high lipid yields, productivities, and titers (Figure 1). 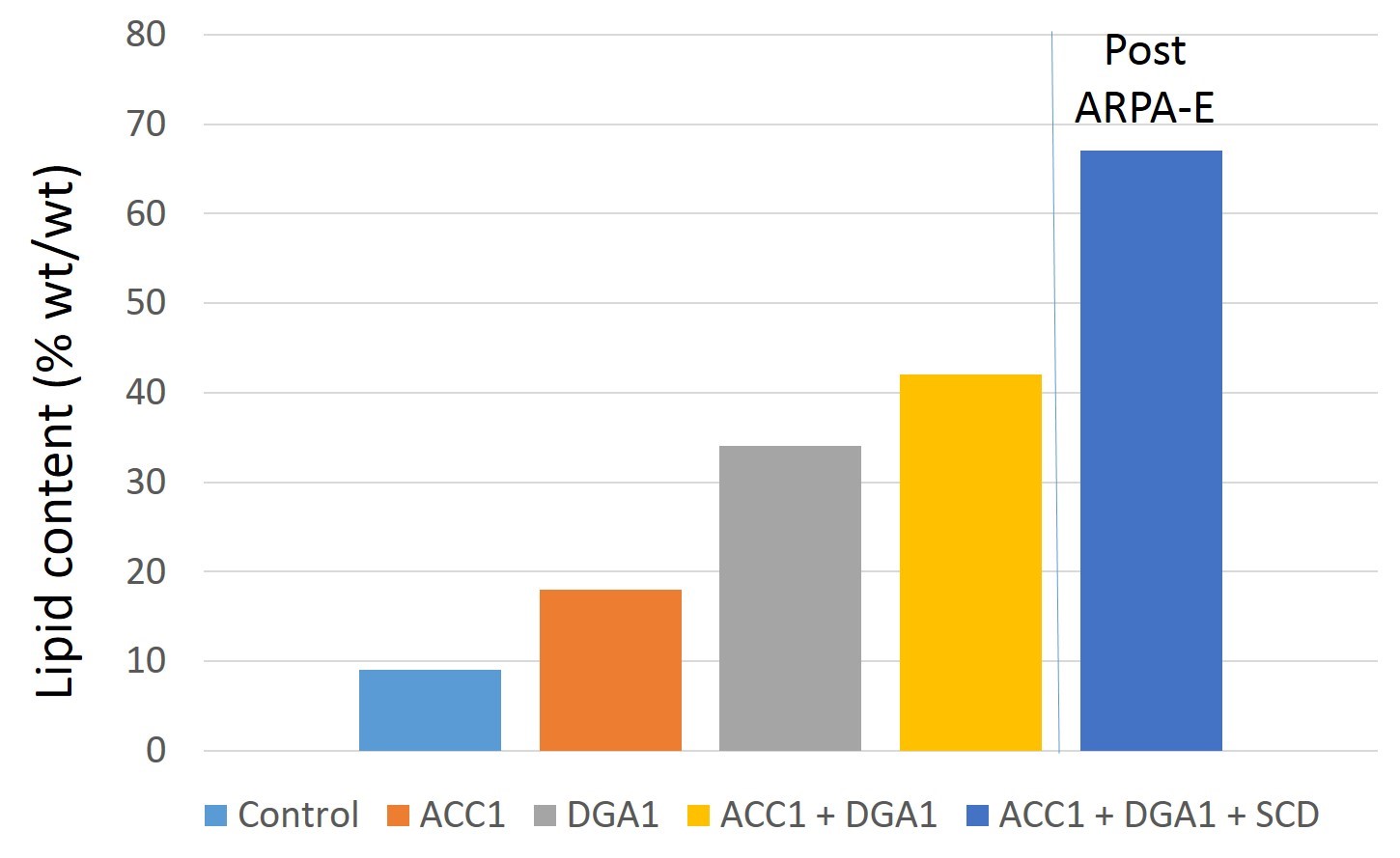 The first technical challenge in this project was to develop a chemoautotroph capable of producing acetate from CO2 and H2 at high productivity and yield. The major challenge was that engineering chemoautotrophs was uncharted. Univesity of Delaware (UD) leveraged whole genome sequencing, to engineer C. ljungdalhii to produce and secrete acetate. The team developed a genetic system to stably delete or “knock-out” specific genes in a targeted manner. Specifically,UD researchers demonstrated controlled genetic disruption that was stable on the chromosome for over 80 generations. This technique enabled targeting for deletion specific transcription factors (e.g sigK) postulated to be essential for sporulation. Clostridia produce acetate in order to generate ATP to power cell growth. However, when preparing for sporulation, Clostridia will utilize acetate and generate acetone. The team hypothesized that the sigK knock-out would halt sporulation and acetate utilization. The UD team demonstrated that their hypothesis was correct. The team observed that, acetate utilization was curtailed in the sigK knock-out, resulting in an increase in acetate production relative to wild type by 30%. The technique was a first for demonstrating how new genetic tools could be applied to Clostridia for increasing acetate production.

Figure 3. Lipid titer and biomass production in an integrated process.

The second technical challenge was to achieve very high lipid yields through an oleaginous yeast using acetate as the feedstock. The team had prior art on engineering the yeast Y. lipolytica for increased lipid production.[2] The challenge for the MIT team was to significantly increase the amount of lipid on a weight per weight basis to > 50%—a range that had not been achieved by oleaginous yeast or microalgae grown under phototrophic conditions. The MIT team devised a strategy to create high carbon flux to TAGs through the overexpression of the enzymes acetyl-CoA carboxylase (ACC) and diacylglycerol (DAG) in the yeast, and demonstrated a five-fold increased lipid content (Figure 2). The team created significant improvements in oil production from sugar achieving titers of 20-30 g/L at lipid yields of ≥60% of theoretical maximum and productivities of 0.6-1.0 g/L/h by the end of the ARPA-E award period.

The MIT team leveraged the technical accomplishments achieved under the ARPA-E award to demonstrate integration of chemoautotrophic production of acetate followed by heterotrophic lipid production. Integration of the two technologies required development of hollow fiber membrane and cell recycle unit operations to achieve high biocatalyst loading and product titer. The first stage is an anaerobic bioreactor, in which H2 reduces CO2 to 30 g/L acetate, followed by the second stage where acetate is utilized for TAG production. In 2016, after the conclusion of the ARPA-E award, the team published continued research into the integrated, continuous two-stage reactor system and demonstrated production of natural oils froma mixture of gases of CO2 and CO or H2. The system produced 18 g/L of C16-C18 TAGs at a productivity of 0.2 g/L/hr and final lipid content of 36% in its integrated form of the two-stage bioreactor system (Figure 3).[3]

The project demonstrated the feasibility of modifying chemoautotrophs for bioengineering applications, with potential applications in fermentation of syngas. It also showed that a two-stage chemoautotroph-heterotroph bioprocess can produce lipid yields comparable to yields achieved using microalgae fed with sugar, and significantly higher than microalgae grown under phototrophic (no sugar) conditions. Much of this work was transferred to the public domain in the form of reports and publications, as reflected in the Intellectual Property and Publications section below.

Through licensing, the for-profit biotechnology company Novogy has acquired the use of genetically engineered yeast biocatalysts developed at MIT for the production of lipids. Work at both MIT and Novogy continues and improvements have been validated. Currently, the team has increased lipid titers using glucose as the feedstock to 100 g/L at yields of 0.28g/g, values in scope of commercial potential in anticipated first markets such as animal feeds.

MIT continues to develop Y. lipolytica as a biocatalyst for industrially-relevant bioprocessing. Post ARPA-E, MIT identified the enzyme delta-9-stearoyl-CoA desaturase (SCD) as a rate limiting step in the lipid biosynthesis pathway and as a new target for overexpression. When combined with ACC and DAG, SCD overexpression further increased lipid content to nearly 70% wt/wt. Y. lipolytica can also grow on acetate and other volatile fatty acids, products of anaerobic digestion of various wastes. Using cell recycle and metabolism-based controls of feed, lipid titers in excess of 120g/L have been achieved on acetate at productivities in the range of 1g/L/hr.

The MIT-led project significantly advanced the technologies needed for commercialization of biofuel production based on chemo-autotrophic organisms. Continuing challenges for commercialization are the need for the supply of a low-cost reducing agent such as of H2 and further technology advancement to ensure that the integrated system depicted in Figure 1 achieves the performance that has been demonstrated for each individual unit.

The work on chemoautotrophs such as C. ljundahlii, though still in early-state development, provides a pathway to bypass photosynthesis for CO2 utilization. The ability to process CO2 through bioengineering approaches that do not require light input provides a future option to complement traditional agricultural production of biomass, and as a potential pathway to carbon capture and utilization.

Methods for Microbial Oil Overproduction via Amplification of the Biosynthetic and Sequestration Pathways Individually or in Combination. US Patent 8951776. (2015) Washington, DC: U.S. Patent and Trademark Office.

The MIT and UD team has also published the scientific underpinnings of this technology extensively in the open literature. A list of publications is provided below: