Gas-to-liquid processes enable monetization of gas resources through production of fuels and chemicals. Microorganisms have been demonstrated to effectively convert a variety of gas streams to fuels and other products via gas fermentation, in which the microbes consume gases for carbon and energy, rather than sugars as in traditional fermentation. A key technical challenge for gas fermentation, especially at small scales, is designing a cost effective and energy efficient fermenter (bioreactor) that enables very high rates of gas transfer into the fermentation liquid. Process intensification through development of novel, highly-efficient, bioreactors will have a broad impact by enabling economic production of fuels from multiple gas streams that would otherwise be emitted, flared or combusted for power generation, generating carbon dioxide (CO2). These gas streams contain carbon monoxide (CO), CO2, hydrogen (H2), and methane (CH4), and can come from:

Only a small number of these gas sources are of sufficient scale to enable competitive fuel production economics today. Production of liquid fuels from the numerous smaller gas sources that are not yet economical may become cost effective with increased bioreactor efficiency.

Enhancing gas-to-liquid mass transfer has been a long-standing challenge in the bioprocessing industry and a wide range of fermenter designs have been tested to address this problem. While high gas transfer rates can be achieved, it is typically at the cost of high energy input. A key to improvement is to maximize the area of the interface between the gas and liquid phases. Advances in computational fluid dynamics modelling and innovative experimental tools to assess experimental performance now make it possible to design and construct a bioreactor that uses this approach to significantly reduce capital and operating costs. 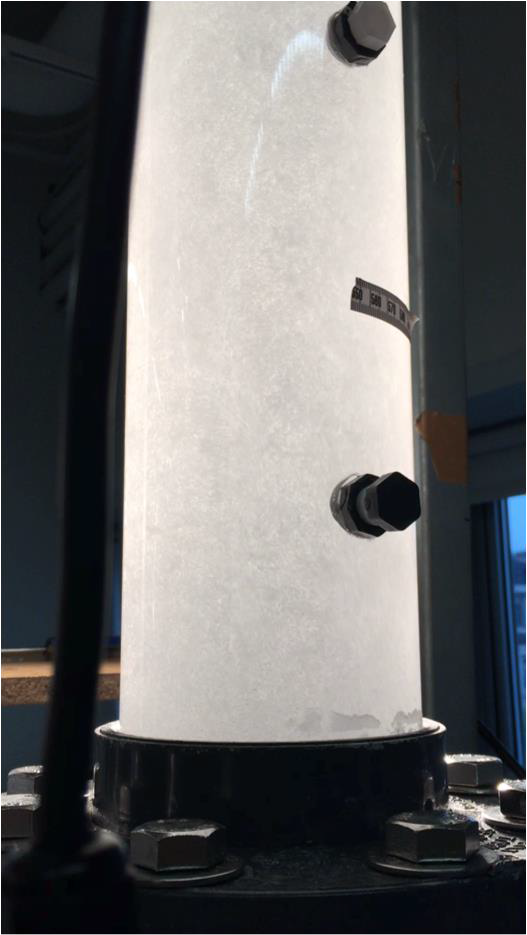 The primary objective of this project has been to develop a new type of bioreactor which maximizes gas mass transfer by creating a large gas surface area per unit volume, and maintains that high surface area throughout large parts of the total reactor volume, giving the gas enough residence time to be fully utilized. To address this challenge, the LanzaTech team designed and built a new type of microbubble reactor, which combines a novel device for microbubble formation with a reactor geometry and liquid circulation approach which has dramatically increased gas mass transfer coefficients by nearly one order of magnitude above that in state-of-the-art gas liquid bioreactors. Using computational fluid dynamics (CFD) modeling the team was able to optimize the geometry of the microbubble generator to reduce energy losses. The project team also designed and deployed special high speed cameras to visualize bubble size and bubble distribution in the reactor, which was necessary to validate and refine the CFD model used to optimize the fluid flow in the reactor. The new design, which has been demonstrated at a 200L scale, can double the amount of gas transferred per unit of energy input compared to even the next best airlift reactor design.

To test the new reactor design with a representative gas-consuming microorganism, LanzaTech used its well established CO fermenting organisms. Using the new reactor design they were able to increase the gas uptake rate by the microorganisms by 50% per unit reactor volume. This higher gas uptake rate also resulted in doubling of the biomass productivity in the new reactor versus their best reference system. The experimental fermentation data also allowed the project team to further update the CFD model of the reactor to better reflect the conditions in a reactor containing real fermenation broth including microorganisms.

The practical results of this new design are the ability to reduce the required reactor volume by two thirds without having to increase the system pressure. This in turn lowers the energy requirement for gas compression, one of the main operating cost parameters in gas fermentation, by approximately 80%.

The team is currently working on further improving the reactor design based on fermentation data and will also test the system with methanotrophic microorganisms. A system energy audit will provide critical performance data that will inform TEA and LCA performance models, which will guide scale up efforts.

LanzaTech’s process intensification technology for the fermentation of gases has successfully advanced the state of the art in mass transfer, such that mass transfer of the gases into solution now exceeds the current uptake abilities of the fermentation organisms. The engineering and accessory equipment sizing improvements result in an overall reduction in plant capex that the team’s technoeconomic assessment indicates is sufficient to shift more projects into commercial viability.

The next step towards the commercial impact of this technology will be to integrate the new reactor into existing LanzaTech process designs by building and optimizing a demonstration plant at 1/10 scale (18-24 months) followed by construction and startup of the first commercial unit (additional 18-24 months). These first commercial units are expected to be commissioned as part of the roll out of LanzaTech’s existing CO and CO2 fermentation processes used to recycle waste gases from steel mills and other industrial facilities. The first publicly reported project with a conventional reactor is under construction now alongside the steel maker ArcelorMittal that will harvest waste gases from a steel plant to produce 64,000 tonnes of ethanol per year.

The team’s assessment indicates that the improved bioreactor offers the potential for capital and operating cost reductions over the current state of the art. This cost advantage provides an opening for bio-recycling of waste gases to competitively target the 25 separate chemical markets, including ethanol, for which LanzaTech is engineering and optimizing their industrial waste gas organisms.

As an example of the potential scale of impact, about 60% of the worldwide production of 'crude steel' by the basic oxygen furnace (BOF) process is market-addressable for capture of BOF gas. If this is all converted to EtOH, this has the potential of producing 19 million tonnes (6.4 billion gallons) per annum. Given that LanzaTech ethanol reduces GHG emissions over conventional gasoline by 65% on average, producing 19 million tonnes of ethanol per year would bring a reduction of 31 million tonnes of CO2.

In addition to transportation fuels, early target markets for the recycled waste gas–to–products technology are styrene butadiene ($13B/year), polybutadiene ($8B/year), acrylonitrile butadiene ($16B/year), and nylon 6,6 ($7B/year). Finally, the fermentation technology may be applied to other waste gases including wellsite flared natural gas. By bringing waste and underutilized carbon (CO, CO2, flared methane) back into the industrial cycle, LanzaTech estimates that the material impact is a reduction of hundreds of billions of gallons per year in oil-equivalent fossil energy consumption, with over 700 million tonnes of CO2 emissions eliminated per each 100 billion gallons of fossil fuels not used.

As of September 2016, the LanzaTech team has reported one invention and published the following articles regarding the scientific underpinnings of this technology: