Regionally sourced renewable electric power allows local communities to address their own needs while also supporting U.S. energy security and reducing energy emissions. One potential regional power source is wave energy, a form of marine hydrokinetic energy conversion[1] that shows promise. A wave energy converter (WEC) couples the motion of ocean waves into mechanical displacements that in turn drive an electric generator. The efficiency of energy capture relies on the WEC system being tuned to the frequency and amplitude of the waves, but ocean waves are highly variable. Early WEC systems used passive controls tuned to the average behavior of the waves and thus were able to capture only a fraction of the available power. As a result, the levelized cost of energy (LCOE) for WECs is not typically competitive.[2],[3],[4] New control approaches make it possible to actively tune a WEC system to the range of sea-states experienced (wave height and wave period combinations).[5],[6],[7] This requires highly accurate, real-time wave-by-wave measurements, which can be obtained by data buoys located in proximity to WECs. The cost of high-quality wave assessment buoys needs to be reduced by an order of magnitude to be cost effective for field deployment. 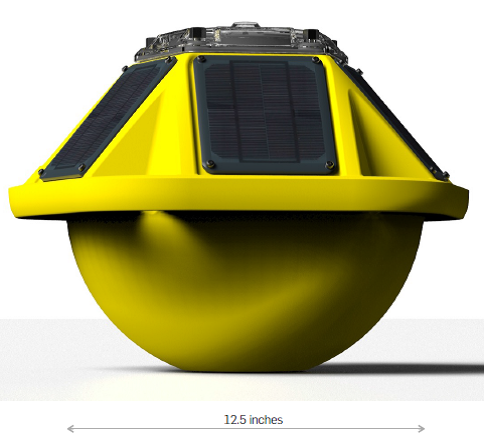 The Integral team then embarked on the development of the next generation system to produce wave-by-wave measurements. One of the main challenges of wave-by-wave measurement is filtering the noisy data. To overcome this challenge, Integral leveraged advanced real-time filtering techniques developed primarily for the aerospace industry. The team validated the resulting wave measurement buoy, WaveSpotter V2, on a custom built validation stand and demonstrated <5% error in derived displacement at 5 Hz and <1% error in period. The WaveSpotter V2 was also field tested off the coasts of Waimanalo, HI and Santa Cruz and Santa Barbara, CA, where it demonstrated real-time communication of highly accurate (<5% difference compared to COTS devices), real-time, predicted wave data to another WaveSpotter that acted as a proxy WEC device.

In parallel, the team also developed a technoeconomic model to quantify the impact on LCOE of a combined wave-by-wave assessment tool (WAT) and WEC array system versus a WEC array that did not incorporate a WAT. The analysis showed that the deployment of a low cost, wave-by-wave WAT could provide significant gains in average annual power capture (up to 2 times) from a combination of increased power capture efficiency across all sea states and decreased duration of shut down periods. This could lead to a potential decrease of LCOE by as much as 50% compared to a WEC array that does not incorporate predictive control. 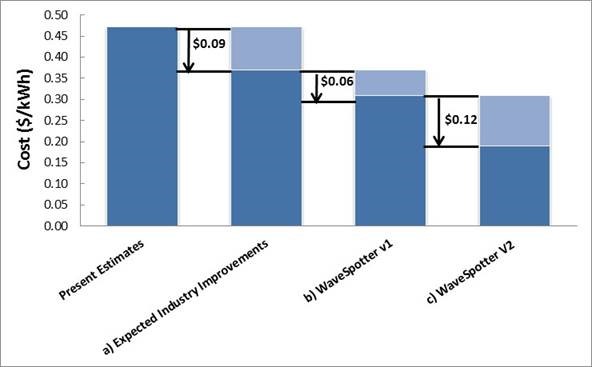 Integral plans to begin selling its first generation product, WaveSpotter V1, in early 2017. It is capable of generating wave data with resolution on the order of minutes and will be available at a low cost (~$5,000). The Integral team is aiming at first-market applications including offshore oil and gas rig monitoring, maritime traffic, resorts and recreation, oceanic research and modelling, insurance industry, coastal protection, homeland security, and military applications. Success in these early markets will enable the team to scale production of the product.

Integral is working closely with WEC manufacturers to develop active tuning methodologies and protocols so that by the time WaveSpotter V2 is commercially ready, the market for it will be more fully developed. Additional field testing is planned for spring of 2017 to summer of 2017, where Integral will participate in joint demonstrations in which WEC devices will use predicted wave data from Integral’s technology to actively tune themselves and test performance gains. If successful, Integral would be in position to quickly roll WaveSpotter V2 out to the market. WaveSpotter V2 can be produced in much the same way as WaveSpotter V1, allowing Integral to leverage the scaled-up WaveSpotter V1 production capability with simple substitution of the microprocessor unit and data telemetry system.

Wave energy conversion has the potential to produce approximately 1,000TWh/yr (about 25% of the current domestic electricity generation)[8] in the United States, almost all of which is currently untapped. These resources are often located near major population centers and offer a consistent, predictable resource, making it a good candidate for supplementing U.S. clean power production. The realization of actively tuned WECs, enabled by the data from low cost, high-quality sources such as Integral’s low-cost WaveSpotter, significantly improves the potential for economic viability of this resource.

As of November 2016, the Integral team’s project has generated one invention disclosure to ARPA-E and one U.S. Patent and Trademark Office (PTO) patent application, with at least three more on the horizon. The Integral team has also presented the scientific underpinnings of this technology at professional conferences.  A list of presentations is provided below: