The United States releases a large amount of carbon dioxide (CO2) into the atmosphere each year—about 5.4 billion tons annually from all sectors. The research community has made progress in methods for carbon capture, but an economically attractive use for the CO2 is needed to lower the costs of reducing carbon emissions via capture. One possibility is to convert CO2 to useful chemical products. However, CO2 is chemically unreactive, so its conversion to the reactive precursor, carbon monoxide (CO), or other chemicals is tremendously difficult to do cost-effectively. Electrochemical approaches to this problem have been hindered because of large activation barriers (over-potentials) that create a large energy requirement for conversion. 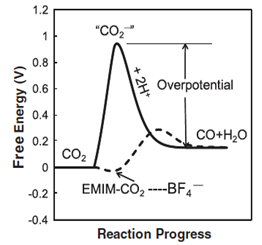 The electrochemical conversion of CO2 into useful products has been studied for decades, but until 2011, all of the existing processes suffered from the need for large over-potentials, and/or limited selectivity to desired products. In 2011, researchers from Dioxide Materials reported success with using an ionic liquid meditated-process that stabilizes the high-energy anionic intermediation in the CO2 to CO conversion, thus significantly lowering the over-potential as illustrated in Figure 1.[1] CO is a precursor to a large set of chemical processes used to create hydrocarbon products (e.g., in a Fischer-Tropsch plant or bioreactor), so an improved pathway to CO production from CO2 opens new opportunities for CO2 utilization.

The major requirements for designing an electrochemical cell that produces CO economically are: 1) a low overpotential reaction,  which selectively converts CO2 to CO; 2) a high enough current density to minimize the size of the cell need for high rates of chemical conversion; 3) a long life time; 4) the potential to scale up the design to show that the chemistry works at industrial scales. The project started with Dioxide Materials’ ionic liquid containing membrane electrode assembly (MEA, Fig. 2), which showed low overpotential and 99% selectivity, but low turn-over rate. Over the course of the four-year project, the Dioxide Materials team increased the reaction rate, as demonstrated by increasing current per unit area over 4000x from 0.08 mA/cm2 to 400 mA/cm2, and increased the lifetime over 500 times, from 8 hours to 4,500 hours by systematically tuning the cell design and ionic liquid composition. 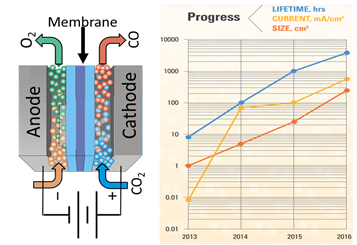 In parallel, 3M helped in scaling up the components of the MEA towards a roll-to-roll process, while maintaining cell performance and evaluating alternate designs. This aided in addressing the final challenge of scaling up the device size from 1 cm2 to 250 cm2. Through this effort, the team has increased the total CO production volumes by a factor of one million. The team is currently demonstrating manufacturing the membrane in a roll-to-roll process in order to prepare materials for sales and build a pilot-scale facility. The team’s techno-economic analysis has identified four entry-point commodity chemical markets for the Dioxide Materials CO2 electrolysis process: CO to 1) polycarbonate, 2) formic acid, 3) acrylic acid, and 4) renewable fuels. The next stage is to build larger cells and stacks for a  pilot electrolyzer. 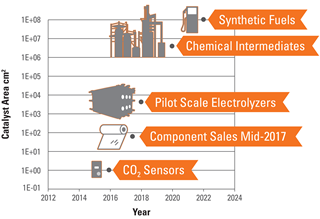 Dioxide Materials’ development plan is first entering small, addressable markets for their membranes to drive down costs and improve their manufacturing process. Figure 3 outlines a market strategy that initially targets CO2 sensors through a technology licensing agreement. In parallel with the sensor sales, the company is pursuing direct sales of the proprietary anion exchange fuel cell membrane. By making these membranes available to academic and industrial researchers, Dioxide gains both a beachhead revenue stream for the company and direct feedback from customers for sustained improvement and optimization of the membrane and the scale-up of the manufacturing.

The membrane manufacturing process development is being supported by 3M Corporation, which has been a cost share partner throughout the ARPA-E project and is a world leader in the scale-up of electrochemical assemblies and fuel cells.

Beyond the beachhead markets, Dioxide Materials plans to develop commercial electrolyzers that can be used to produce the CO precursor for renewable fuels and chemicals, and license them worldwide in partnership with 3M. This will first be done through pilot scale electrolyzer projects. The pilot is designed, and the Dioxide Materials/3M team has demonstrated production of the needed membranes. Dioxide Materials has ongoing commercial discussions about applications in CO2 waste stream utilization with a range of industrial chemical producers, including Modac, Linde, and Siemens.

Dioxide Materials’ CO2 electrolyzer is a significant advance toward the goal of CO2 utilization as part of worldwide CO2 mitigation efforts. The targeted long-term impact is commercial technology that allows chemical manufacturers to make fuels and chemicals at a competitive cost while simultaneously providing a use for CO2 that is captured to reduce CO2 emissions into the atmosphere. Fuel production from CO2 is the market with the largest potential for reducing net CO2 emissions. Individually, chemicals have smaller production amounts (e.g. total U.S. market for acrylic acid is 5.2 Mtonne), but larger profit margins that provide the opportunity to enter manufacturing and drive down costs.

As of August 2016, the project has generated six invention disclosures to ARPA-E, six U.S. Patent and Trademark Office (PTO) patent applications and one issued patent.

The team has also published the scientific underpinnings of this technology in the open literature. A list of publications is provided below: