There are generally two approaches to EV battery design: a small number of large-format cells or a large number of small-format cells. EV manufacturers have traditionally favored the first approach because there are fewer cells to assemble into a pack. However, larger cells exhibit many limitations: they require significant control hardware to prevent thermal runaway; cost more; have a lower manufacturing yield; exhibit lower energy density; and require additional protective structure. By contrast, small-format cylindrical wound lithium-ion (Li-ion) batteries have a mature manufacturing process and all aspects of the cylindrical wound (“jelly-roll”) cell design have been optimized at very large scale, which has led to lower costs, higher product yield, and higher energy density. If a large number of jelly-rolls can be successfully integrated into packs, then an opportunity to improve EV batteries arises.

Under its RANGE award, Cadenza Innovation designed and built a large-format “supercell” (Fig. 1) that combines 24 jelly-rolls into a single container. This supercell behaves like a small-format, cylindrical wound cell, but with several key enhancements designed to improve safety. The jelly-roll cells within the supercell are open, which provides new opportunities for how safety abuse scenarios are managed, including single cell thermal runaway, mechancial abuse, and over pressurization due to gas formation. A single rupture disc is located on the supercell wall with a flame arrestor so that even when a cell creates a thermal event, there is no flame outside the supercell. A metal shunt connected to all of the jelly-roll cells will stop further discharge by fusing when the cell is directly shorted. Finally, the ceramic material surrounding the jelly-roll cells absorbs heat and discharges gas, allowing the heat to be effectively removed from the supercell and preventing cascading thermal events of neighboring jelly-roll cells. The jelly-rolls are designed to maximize energy density without making any compromise to pass industry-required safety tests (e.g. nail penetration test). 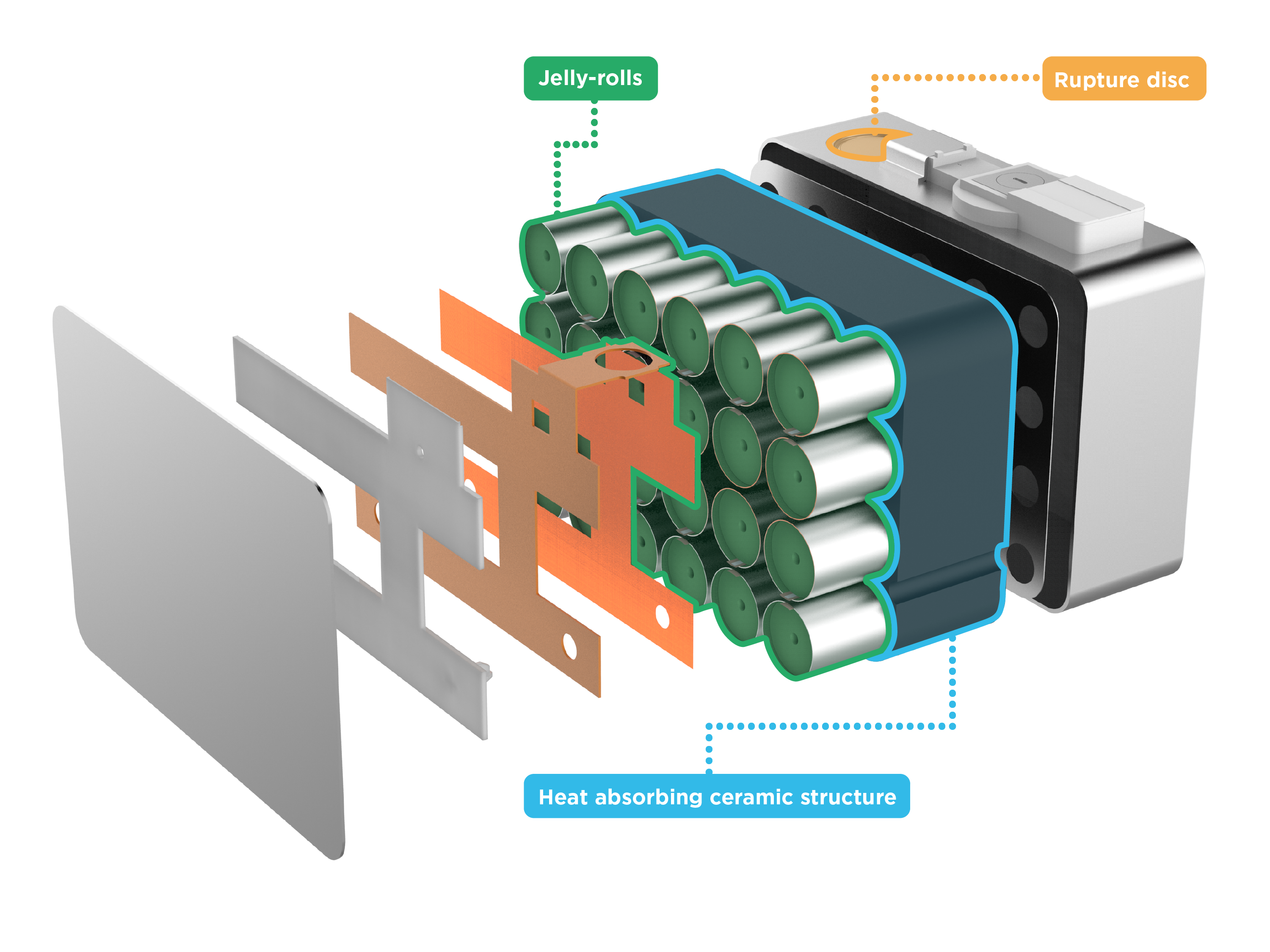 The project team drew on the expertise of a number of partners to engineer a high-performance supercell that is competively priced and can prevent a catastrophic thermal event in the case of overcharging, shorting, or mechanical deformation. NREL contributed modeling expertise to confirm that the supercell system could prevent cascading thermal runaway. Morgan Advanced Materials’ novel ceramic, originally developed to fireproof airplane “black boxes,” is used as the protective and heat-absorbing structure surrounding the cells. Alcoa supported the design of the rupture disc for the supercell, and FCA provided an EV platform to test the supercells.

By the end of its ARPA-E award, the team had demonstrated key safety features in the supercell design and had established a semi-automated manufacturing line capable of producing significant volumes of supercells to evaluate all production steps and support more extensive testing for safety and performance, including application level. Evaluation of both the design and manufacturing process enabled verification of cost targets that meet the RANGE EV pack goal of $125/kWh. In addition, independent third-party safety testing is underway at Carderock Naval Warfare Center.

Cadenza Innovation has raised funding from investors to grow to a 25-person company and is currently marketing its technology to potential licensees. Battery system demonstrations include a stationary energy storage system and a battery pack for a Fiat 500e. Cadenza Innovation also won a contract with New York State Energy Research and Development Authority (NYSERDA) to develop the technology into a product optimized for the peak shaving market in New York State. With lower costs, driven by higher energy density and simplified safety control features, this supercell could disrupt both the EV and stationary storage markets.

ARPA-E funding enabled the development of this novel packaging architecture that now opens an innovative approach to meeting the cost and performance requirements needed for the widespread adoption of EVs. Such inexpensive and safe batteries could also find application in stationary energy storage, especially for behind-the-meter storage, which can help increase penetration of intermittent renewable energy.

As of January 2018, Cadenza Innovation’s project has generated nine invention disclosures to ARPA-E.