Marine hydrokinetic energy conversion is a potential candidate for regionally sourced electricity, which can meet the security, economic, and environmental needs of local communities. Riverine and tidal energy converters show promise, but both are still nascent industries. These technologies are typically not cost competitive (>$0.25/kWh)[1] because of the inherent drawbacks of passive, rotary turbine-based systems. Traditional rotary turbines suffer from three major challenges. First, they have limited scalability due to the fact that they must be sparsely distributed in a river or tidal field, as they are not compatible with shallow sites, and they do not efficiently extract power across all flow conditions. Second, traditional rotary turbines require specialized and expensive deployment and maintenance. Finally, they may lead to undesirable environmental effects. Traditional rotary turbines may interfere with animal movement and the turbine blades may pose risk of injury due to high tip speeds during rotation. New design approaches are required to overcome these drawbacks.

Studies in the field of fluid dynamics has shown that a number of flying insects, birds and animals outperform fixed wing aerodynamic performance using unsteady leading edge vortex shedding. This suggests that the unsteady effects themselves have the potential to improve the efficiency of power conversion by enhancing lift (delaying stall). If the leading edge vortex can be controlled, this approach can be used to improve efficiency and cost-competitiveness of riverine and tidal energy conversion systems, which have traditionally aimed to avoid unsteady hydrodynamic flow regimes.

Figure 1:  Principle of operation behind power conversion by oscillating hydrofoil systems. The hydrofoil is tilted downwards on a down stroke (left) and upwards on an up stroke (right). As a result, the hydrodynamic force on the hydro foil always points in the direction of the motion, and the flow does mechanical work on the hydrofoil, which drives a generator. 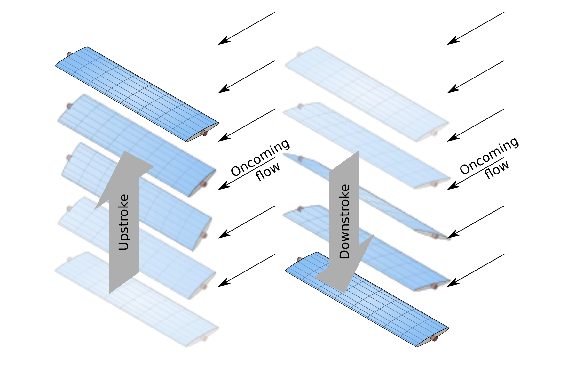 The Brown team’s goal was to incorporate active feedback and control into a physical tidal generator based on an oscillating hydrofoil design. The basic principle of operation of an oscillating hydrofoil, which is very different from a rotating turbine, is shown schematically in Figure 1. The primary objective was to demonstrate deployment, survivability and electricity generation at rated power over at least one month in reversing tidal flow.

The Brown team used lab experiments and computational fluid dynamics (CFD) analysis as a tool to design, optimize and validate the design. The result is a 1kw device with a mechanically coupled pair of wings that are driven by flowing water to heave vertically and pitch at the center axis. The optimal kinematics for the leading edge foils have a high pitching amplitude, or high maximum angle of attack (70-80 degrees). At these high angles, the boundary layer, or the fluid on the surface of the foil, separates from the surface and forms a vortex at the leading edge of the foil. This leading edge vortex persists over the top of the foil during the upstroke, increasing the lift force with its low pressure core for a large portion of the stroke.  When the foil reserves at the top of the stroke the vortex sheds, and another is formed on the lower side of the foil for the same effect. A real-time controller monitors the position and forces on the wing and adjusts the load to maximize power output at a given flow speed.

A second prototype test was conducted to test the interactions between two devices, the second downstream of the first. The pair of tandem foils illustrated in Figure 2 achieved the 2kW design power rating. The power generated by the downstream set of foils was 60-80% of that generated by the leading foils, as compared to rotary turbines where the trailing turbine generates at most 40% when placed 6 diameters away. Deployment used a low cost tugboat that brought the floating platform into position and lowered the foils into the water. Seamless transition between operating mode (hydrofoils pivoted in) and maintenance mode (hydrofoils pivoted out) was demonstrated.

To assess potential environmental effects of the oscillating hydrofoil design, the Brown team formed a partnership with Wellesley College and the Volpe Center. Wellesley College, through a series of experiments, showed that under laboratory conditions the device had minimal impact on fish behavior or on biochemical indicators of physiological stress. The Volpe Center assessed the technology for a wide range of environmental considerations (alteration of currents and waves; alteration of bottom substrates, sediment transport, sediment deposition, and benthic habitats; noise; chemical toxicity; interference with animal movement or migration; and strike; amongst others). They identified several aspects of the hydrofoil design that may have reduced environmental impacts compared to traditional rotary turbines.

Field data from summer 2016 tests suggests that the effects of the technology on water currents is limited to a short distance below and behind the device, thus effects on sediment transport are likely minimal. Additionally, the tip speed of the foils was the same as the water speed while tip speed of rotary turbines is significantly faster than the water speed. Slower movement of hydrofoils for a given current speed compared to turbine blades is likely to be easier for wildlife to avoid, further reducing the risk for injury and mortality due to strike.

Figure 2: Brown University's 2kW prototype cyber-physical oscillating hydrofoil marine hydrokinetic energy generation system. (Left) Model of the floating platform design showing the generators, each with tandem hydrofoils, and their ability to pivot into and out of the water. (Right) Photograph of the fabricated device, before its multi-week deployment at the Massachusetts Maritime Academy.

Market analysis revealed that the initial system should be designed to meet the need of smaller (kW) scale systems in remote off-grid markets (e.g. Alaska, Maine, and Brazil) that rely on shipped-in diesel fuel with >$0.50/kWh energy costs. The technoeconomic analysis developed by the team estimates a levelized cost of electricity (LCOE) of approximately $0.37/kWh at the 50kW scale, which would be disruptive to this first, and important, market. Once the team is able to achieve success in the remote off-grid market, it is likely that the next application for technology would be as a component of a microgrid, complementing diesel power and other non-baseload renewables like solar and wind. Combined, these two markets are conservatively estimated to be worth at least $600M.

The project team has attracted a potential commercial partner in BluSource Energy. To secure additional funding, the next step would be to design, build and test a 10 kW prototype for 1 year, which is a standard milestone potential investors require. The Brown team is actively pursuing some recent federal funding opportunities directed toward such year-long tests.

River and tidal energy conversion has the potential for approximately 600TWh/yr (about 16% of present U.S. power generation) in the United States[2], almost all of which is currently untapped. This team’s technical innovation has shown that next generation, cyber-physical riverine and tidal energy generation devices have the potential to viability for significantly lowered costs. Early deployment through first-markets such as remote off-grid communities, which have limited alternatives but abundant river and tidal resources, is viable, and would place the technology on a pathway to utility (MW) scale applications through economies of scale.

As of October 2016, the Brown University team’s project has generated two invention disclosures and a U.S. Patent and Trademark Office (PTO) patent application. The team has also published the scientific underpinnings of this technology in the open literature. One publication is provided below: